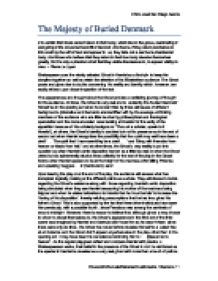 Shakespeare uses the widely debated Ghost in Hamlet as a linchpin to keep the storyline together as well as retain the attention of his Elizabethan audience.

The Majesty of Buried Denmark It is certain that Souls cannot return in their body, which lies in the grave, reanimating it and giving it the movement and life it has lost. And hence, if they return perchance to this world by the will of God and appear to us, they take not a real but a phantasmal body. And those who believe that they return in their true body deceive themselves greatly, for it is only a phantom of air that they clothe themselves in, to appear visibly to men. - Pierre Le Loyer Shakespeare uses the widely debated Ghost in Hamlet as a linchpin to keep the storyline together as well as retain the attention of his Elizabethan audience. The Ghost poses and gives rise to doubts concerning his reality and identity which, however, are easily refuted upon closer inspection of the text. The appearances and thought about the Ghost provide a vacillating journey of thought for the audience. ...read more.

. . in [Gertrude's] ears'. Upon leaving the play or at the end of the play, the audience will assess what has transpired logically, looking at the different points as a whole. They will discount doubts regarding the Ghost's existence along with those regarding Hamlet's antic disposition being simulated when they see Hamlet reassuring his mother of the madness being feigned and when he states beforehand to Horatio that he 'must be idle' to increase the 'forcing of his disposition', thereby refuting presumptions that he had imagined his father's Ghost. This is also supported by the fact that three other individuals have seen him previously, with a possible fourth, since Francisco was among the sentinels of around midnight. However, there is reason to believe that, although ghosts may choose to whom to reveal themselves to, the Ghost's appearance in the third act of the third scene was imagined by Hamlet and Gertrude didn't see him as he wasn't there since there were only six lines, the Ghost has never before revealed himself to a select few at an instance and the Ghost didn't appear anywhere else in the play other than in the opening act. ...read more.

The Ghost still referred to his wife in almost exactly the same manner as the Player King in The Mousetrap just as Hamlet would have recalled the relationship between his parents was: 'Buried Denmark' was knowing or had accepted the fact that Gertrude was going to fall for Claudius '. . . won to [Claudius'] shameful l**t/The will of my most seeming-virtuous queen' compared with 'In second husband let me be accurst!/None wed the second but who killed the first.' This proves the verity of the specter's identity as Hamlet's father: that he was not a devil'. The Ghost is supposed to be portrayed as Hamlet's father's spirit who is actually there since there are no hints of ulterior motives except for the evident one of taking revenge and there are four witnesses in total: Barnardo, Marcellus, Horatio and Hamlet. The Ghost seems to be very transparent with Hamlet, proposing what he wanted Hamlet to do and explained why it was for his benefit as well and in doing so shows the fullness of his character as he shows his retention of a human heart. ?? ?? ?? ?? Chino Jos� San Diego Garc�a Educaci�n/Escuela/Deberes/Cuatrimestre 1/Semana 11 ...read more.