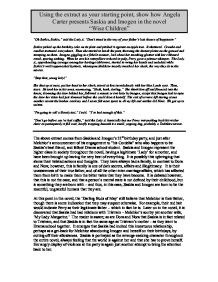 Show how Angela Carter presents Saskia and Imogen in the novel

Using the extract as your starting point, show how Angela Carter presents Saskia and Imogen in the novel "Wise Children" "Oh Saskia, Saskia," said the Lady A. "Don't stand in the way of your father's last chance of happiness-" Saskia picked up the birthday cake on its plate and pitched it against an apple tree. It shattered. Crumbs and candles scattered everywhere. Then she started to break the pots, throwing the dessert plates on the ground and stamping on them. Imogen, giggling in a febrile manner, laid about her smashing glasses with her ribboned crook, sparing nothing. When he saw his caterpillars reduced to pulp, Perry gave a piteous whimper. The Lady A., apprehending carnage among her heritage tableware, started to wring her hands and undulate while Saskia's wails approached hysteria, whereupon Melchior smartly smacked her cheek, the way they do in the movies. "Stop that, young lady!" She shut up at once, put her hand to her cheek, stared at him incredulously with her blue Lynde eyes. Then, tears. He took her in his arms, murmuring, "Hush, hush, darling." She shook him off and flounced into the house, slamming the door behind her, followed a minute or two later by Imogen, except that Imogen had to open the door her sister had just slammed before she could slam it herself. The rest of us were left staring at one another across the broken crockery and I never felt more spare in all my life and neither did Nora. ...read more.

any trouble digging about in the garden. Saskia quotes a line from Winter's Tale, "...which some call nature's bastards" as a dig at the twins being of illegitimate fatherhood. This arrogant comment however, is rather hypocritical, though Saskia does not know that her biological father is actually Peregrine. It is this type of sneering attitude that sums Saskia up. "So rich. So well connected. So legitimate" as Dora comments sarcastically earlier in the novel. The twins' ungratefulness towards gifts is repeated later on, at the 21st birthday party. Perry arrives and gives Saskia and Imogen a small box each containing a caterpillar - his latest interest. He says that he has named them after the twins, and this is obviously very heartfelt. However, this is crushed, and then later physically crushed, when Imogen turns around and says, "Is that all?" This was a huge emotional blow to Perry and this inconsiderate attitude made him "all at once look his age. More. He looked a hundred. He looked a hundred and ten." The way that the pair treats people, not only members of their family, is quite sickening. Strangely, this is Imogen's first main appearance of the novel. Because of her brash and spiteful nature, Saskia has always been centre-stage, and Imogen has always been rather passive. For example, at Dora and Nora's first stage performance, the proactive Saskia bawls her eyes out - once again upstaging the twins - whereas Imogen just falls asleep. ...read more.

This time it is the Lady A.'s turn to make a stand. As the true story of the Darling Buds descent is unveiled "all eyes now swivelled towards Saskia and Imogen, who flinched and quailed." It seems now they cannot hide behind their rich upbringing, their possessions and the things that they have, whilst others have not. This speech has brought them down to the same level as everyone else and it seems that they do not like this one bit. However, even with this truth telling, the girls are still feeling sorry for themselves. "The darling buds clung to one another, pictures of shame and grief." Suddenly we again see the real Saskia and Imogen... "Saskia and Imogen each seized hold of a piece of the Lady A.'s skirt, kissed it and begged her to forgive and forget." The Hazard twins know that Peregrine will once again take off after this episode, and so, now that Melchior has abandoned them, they will have no-one to depend on, and hence they try to make amends - for their own benefit. Unfortunately it is this attitude throughout the whole of the novel that has led to the Darling Buds failure in the end. Whereas the Chance sisters had learnt to make something out of nothing, the Hazard girls had everything and made nothing. Saskia and Imogen needed nothing but love, and in contrast, Dora and Nora had nothing but love. If the story teaches us nothing else, it is that love, and a family - no matter how makeshift it is - can produce success. ...read more.