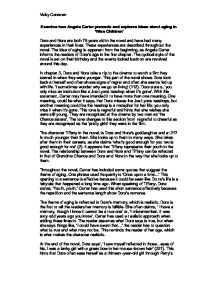 Examine how Angela Carter presents and explores ideas about aging in 'Wise Children' Dora and Nora are both 75 years old in the novel and have had many experiences in their lives. These experiences are described throughout the novel. The idea of aging is apparent from the beginning, as Angela Carter informs the readers of Dora's age in the first chapter. The cyclical style of the novel is set on their birthday and the events looked back on are revolved around this day. In chapter 3, Dora and Nora take a rip to the cinema to watch a film they starred in when they were younger. This part of the novel shows Dora look back at herself and often shows signs of regret and often she seems fed up with life. ...read more.

She takes after them in their careers, as she claims 'what's good enough for you two is good enough for me' (2). It appears that Tiffany represents their youth in the novel. The relationship between Dora and Nora and Tiffany can be reflected in that of Grandma Chance and Dora and Nora in the way that she looks up to them. Throughout the novel, Carter has included some quotes that suggest the theme of aging. One phrase used frequently is 'Once upon a time...' This opening to a sentence is effective because it could be seen like Dora's life is a fairytale that happened a long time ago. When speaking of Tiffany, Dora states, 'Youth, youth.' Carter has used this short sentence effectively because the repetition and the sentence length show Dora's remorse. ...read more.

Dora and Nora are given babies at the end of the novel. They are Gareth's twins and are given to them as a present by Perry. This story is unrealistic, which makes the reader think that maybe the babies are really something else, like kittens. The metaphor of the babies however, is included in the theme of aging. It shows that as one life is nearly ending, one has just begun. Dora sleeps with Perry in the final chapter. She says he is 'not bad for a centenarian'. This tells the reader that Dora knows that he is old and admits this, but it doesn't matter because he is still the same person she knew when she was thirteen. This tells us she is not afraid of aging because she will 'go on singing and dancing until we drop in our tracks'. Vicky Canavan ...read more.