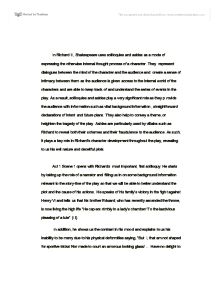 In Richard III, Shakespeare uses soliloquies and asides as a mode of expressing the otherwise internal thought process of a character. They represent dialogues between the mind of the character and the audience and create a sense of intimacy between them as the audience is given access to the internal world of the characters and are able to keep track of and understand the series of events in the play. As a result, soliloquies and asides play a very significant role as they provide the audience with information such as vital background information, straightforward declarations of intent and future plans. They also help to convey a theme, or heighten the tragedy of the play. Asides are particularly used by villains such as Richard to reveal both their schemes and their fraudulence to the audience. As such, it plays a key role in Richard's character development throughout the play, revealing to us his evil nature and deceitful plots. Act 1 Scene 1 opens with Richard's most important, first soliloquy. He starts by taking up the role of a narrator and filling us in on some background information relevant to the story-line of the play so that we will be able to better understand the plot and the cause of his actions. ...read more.

Hence, the first soliloquy helps us understand the context of the play better, introduces us to Richard's true, evil nature as well as keeps us in anticipation as we are also let in on how he plans to attain the throne, with the phrase "plots have I laid... To set my brother Clarence and the king/ In deadly hate" (I.i.32-35), which also acts as a tool for foreshadowing. The following soliloquies in Act 1 further characterizes Richard and shows us that he would do anything, even murder, to fulfil his goal and get his way. His sarcasm and lack of love towards his own brother Clarence as well as his cruel and violent nature is seen here as he shows no hesitance in getting his brother killed, "Simple, plain Clarence, I do love thee so/That I will shortly send thy soul to heaven" (I.i.119-120). " His wicked, and depraved nature is also brought out through his soliloquy in Act 1 Scene 2 as he ridicules Lady Anne for having fallen for his tricks and lies and talks about his heartless plan of using her simply to gain the throne saying, "Was ever woman in this humor won?/I'll have her, but I will not keep her long" (I.ii.235-236). ...read more.

Other than soliloquies, asides are also used by several characters such as Richard himself as well as Queen Margaret to reveal their true thoughts and feelings. In Act 3 Scene 1, Richard uses asides to show us what he really thins of the young prince and how he deceives him with the use of double meanings in his words. For example, "[Aside] Thus like the formal Vice, Iniquity, I moralize two meanings in one word. (III.i.79-83) Over here, his comparison of himself to Vice, is apt as he does play Vice, a comic role, when he is speaking with the audience. However, he always also has two meanings, which is what allows him to also be the machiavel. Also, Margaret uses asides in Act 1 Scene 3 to inform us of Richard's treacheries and prevent us from being deceived like the other characters present. For example, she says "(aside) Out, devil! I do remember them too well:/Thou killed'st my husband Henry in the Tower,/And Edward, my poor son, at Tewkesbury." Her reference to him as a devil is nothing new to us, but simply confirms his evil nature. As such, the asides used have played a part in keeping us informed of the characters innermost thoughts as well as developing Richard's character in the play. ...read more.