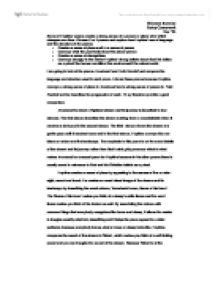 Some of Hopkins' poems create a strong sense of a person or place who/ which changes over time. Choose 2 or 3 poems and explore how Hopkins' use of language and the structure of the poems: * Creates a sense of place and/ or a sense of person * Conveys what the poet feels about the place/ person * Creates a sense of change/loss * Conveys strongly to the reader Hopkins' strong beliefs about God/ his duties as a priest/ the human condition/ the environment/ the natural world. I am going to look at the poems Inversnaid and Felix Randall and compare the language and structure used in each poem. I chose these poems because Hopkins conveys a strong sense of place in Inversnaid and a strong sense of person in Felix Randall and he describes the progression of each. They therefore provide a good comparison. Inversnaid is about a Highland stream and its journey is described in four stanzas. The first stanza describes the stream rushing down a mountainside when it reaches a dark pool in the second stanza. The third stanza shows the stream at a gentle pace until it reaches home and in the final stanza, Hopkins conveys his own ideas on nature and the landscape. The emphasis in this poem is on the exact details of the stream and its journey rather than God's almighty presence which is what makes Inversnaid an unusual poem for Hopkins because in his other poems there is usually some to reference to God and his Christian beliefs as a priest. ...read more.

The alliteration of l's and w's in this stanza adds to the rhythm and rapid delivery of it so that the last stanza is more pronounced and in turn Hopkins' views are more emphatic. The alliteration also helps emphasise his views. Long live the weeds and the wilderness yet. In the first half of this sentence the monosyllables used mean the point 'long live the weeds' is succinct and so it is enforced. Unlike Inversnaid, Felix Randall is a poem about a person and his progression from a strong young man to a weak old man and finally death. We view him through the eyes of a priest who has known and cared for him. Also unlike Inversnaid, this poem contains many ideas about Hopkins' Christian faith and God and his duties as a priest, Hopkins creates a sense of person by opening the poem with direct speech so it as if the priest is talking to someone and we are overhearing their conversation, which then moves to a meditation and we see the priest reflecting on Felix's life. The poem also opens with a rhetorical question which emphasises the point that it is as if we are overhearing a conversation. By telling the reader Felix was a farrier, it immediately conjures up many images and shows that Felix was part of a world of 'craftsmanship and strength', which is also shown by the use of technical language belonging to this world (like forge). ...read more.

my duty all ended Whereas in Inversnaid Hopkins uses compound words that he has made himself, like twindles (turns and dwindles), he uses colloquial language-Lancashire dialect, 'all road ever he offended', in Felix Randall, which gives a strong sense of spoken voice and emphasises the point that it feels like we are overhearing a conversation between the priest and someone else. It also makes the poem less stiff and more emotive because it is someone's thoughts and feelings spoken in their own dialect. The use of colloquial language in this line is to convey a profound spiritual truth as it is saying 'may all his sins be forgiven'. I prefer Felix Randall because I think Hopkins creates a much stronger sense of person than place and it's much more interesting. I think the structure of the poem is better because it is more effective in conveying Hopkins' ideas. By starting with Felix suffering from a serious illness, and then describing how the priest was able to help him and the benefits the priest gained from that and finally to comparing Felix Randall at his prime to how he was at the end of his life makes it a more emotional poem than Inversnaid. The fact that the poem contains ideas of a person's suffering means that a lot more people can relate to it, than to a poem about a Scottish landscape, because everyone has suffered or seen someone else suffer the effects of old age. The use of colloquial language also makes the poem more accessible. 'Ah well, God rest him all road ever he offended!' Rhiannon Knowles Poetry Coursework Nov '03 ...read more.