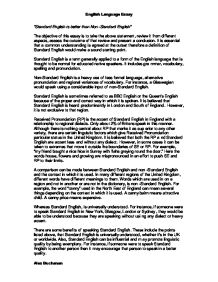 In many different regions of the United Kingdom, different words have different meanings to them. Words which are used in one region and not in another or are not in the dictionary, is non-Standard English. For example, the word "canny" used in the North East of England can mean several things depending on the context in which it is used. A canny bairn means attractive child. A canny price means expensive. Whereas Standard English, is universally understood. For instance, if someone were to speak Standard English in New York, Glasgow, London or Sydney, they would be able to be understood because they are speaking without using any dialect or heavy accent. There are some benefits of speaking Standard English. These include the points listed above, that Standard English is universally understood, whether it's in the UK or worldwide. Also, Standard English can be influential and may promote linguistic quality by being exemplary. ...read more.

SE promotes quality in speech and written language and is readily understood by all classes and English-speaking peoples regardless of nationality. In some people's opinion, English is one of the four most beautiful languages in the world (French, Italian, Spanish being the others). This imposes an obligation to be spoken well. Standard English can be an instrument of power in debate and argument. It has been said that Standard English does not have to rely on swearing to make the point or to be humorous. However, caution must be exercised in order to avoid unnecessary offence or disagreement. The use of SE must be driven by moral goodness and not used as a weapon without sufficient cause. It should also be remembered that non-Standard English has its place in our culture. It is a spoken art and can be used to convey a message in an entertaining, if not enlightening, way. To appreciate this, listen to "To A Haggis" by Robert Burns recited by a Scot on Burns Night (25 January). ?? ?? ?? ?? English Language Essay Alex Buchanan ...read more.