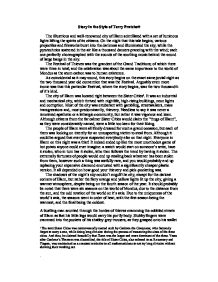 Story in the Style of Terry Pratchett

Story in the Style of Terry Pratchett The illustrious and well-renowned city of Illann scintillated with a set of luminous lights lifting the spirits of its citizens. On the night that this tale begins, various projectiles and fireworks burst into the darkness and illuminated the sky, while the pyrotechnics scattered in the air like a thousand dancers prancing with the wind; each one perfectly choreographed with the sounds of the soothing music behind the sound of large bangs in the sky. The Festival of Thieves was the grandest of the Grand Traditions; of which there were three in total, and the celebration was about the same importance to the world of Mondus as the atom carbon was to human existence. As coincidental as it may sound, this story begins on the exact same jovial night as the two thousand year old convention that was the Festival. Arguably even more ironic was that this particular Festival, where the story begins, was the two thousandth of it's kind. The city of Illann was located right between the Sister Cities�. It was an industrial and mechanical city, which thrived with nightlife, high-rising buildings, neon lights and corruption. Most of the city was exuberant with gambling, streetwalkers, mass transgressions and, most predominantly, thievery. Needless to say it was never a renowned apathetic or a lethargic community, but rather it was vigorous and keen. ...read more.

His attire wouldn't have looked out of place in an orphanage or a homeless shelter. The hasty fellow who squirmed through the crowds was a rat-like person, with a scrunched up face, a large hooked nose and a set of crooked and yellowing teeth. Iggy, as his mistress called him, was a cowardly sort of man who feared large cities, so it's blatant to see just how much he despised this night but he knew of the important errand his mistress had requested. Iggy began to walk hurriedly towards his destination: the third valley of the fifth street of the Western district of Illann was where his mistress ordered him to meet on this momentous night. The mission was simple: get the item to his mistress, receive your pay, allow the mistress to execute whatever devious plan he had and celebrate their victory together. The hustle and bustle of Illann didn't deter Iggy from his task. He approached the third valley and crept like a rat into the putrid corners of the city. Immediately he saw the cloaked, thin figure of his mistress. Their face was masked by a triangular bib which balanced on the edge of his nose, and concealed everything beneath his eyes. A bandana cloaked everything above their eyebrows, and the rest of the black clothing meant that simply the eyes were visible even in daylight so, in the deepened darkness of the valley, only the gleam from their pupils and the outline of their body was noticeable. ...read more.

Oh, I can't believe we're here now. Oh, and the legendary thief is here herself! Imagine that! This is the happiest time of my life, I swear! O, what if we were to see her in person? I'd be so proud. But I'm just thankful to be here. Just think of all the things we may pinch tonight, right, Boyd?" The girl's voice was very fast and excitable. It was times like these that the famous scientists of the world would blame these rare occurrences of excitement on some sort of exciting happening. And it was these sorts of claims that make the people of the world argue that all scientists should be fired. "You should rejoice, Amie," the man known as Boyd replied. "This is our night," he said, as he strategically knocked into a six year old just so he could steal a necklace. Boyd was the kind of man who would look down at what he had just stolen and think: what did this mean to the person that had it? Would they even notice that it was stolen, or would they simply ignore the fact and assume they'd lost it? Did it mean practically nothing to the person, or did it mean so much that they became a manic depressive? Then Boyd would lift his head after thinking he may have caused a child to be miserable, and say - "You know, life is good." And on this night, during the two thousandth Festival of Thieves, the entire perception of Illann was about to change drastically. ?? ?? ?? ?? . ...read more.