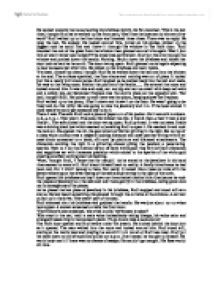 He walked towards the house holding his briefcase tightly, his fist clenched. 'This is the last time,' thought Rudi as he walked up the front path, 'next time the boss can do his own dirty work!' Rudi walked up to the front door and knocked three times. There was no reply. He rang the bell. No answer. He looked around him, pulled on his gloves, picked up the biggest rock he could find and threw it through the window in the front door. Rudi knocked the rest of the glass from the window then glanced around him again. Was it just him or was it rather cold tonight? The street was eerily silent. Rudi put his arm through the window and pushed down the handle. Nothing. He put down his briefcase and kicked the door lock as hard as he could. The door swung open. Rudi glanced round again expecting to hear someone yell after him. He picked up his briefcase and went inside. 'It's clean. Almost too clean,' thought Rudi as he walked down the hall and into the kitchen at the end. ...read more.

The safe clicked and the door swung open. Rudi grinned. It was too easy. Inside was a shining black box which seemed to be asking Rudi to open it. He reached in and took the box out. He opened the lid, the gold letters of Cartier glinting in the light. Sat on top of a deep violet cushion was a majestic looking diamond and onyx panther sitting within an onyx circle connected to a black, silk cord by platinum and diamond attachments. The diamonds catching the light in a glittering shower giving the pendant a penetrating sparkle. Next to it on the cushion lay an 18-carat white gold ring with brilliant diamonds and sapphires set with immense precision which added to the sparkle of the white gold creating an effect nothing short of dazzling. 'Wow,' thought Rudi, 'I fancy that for my girl.' As he stared at the jewellery in his hand time seemed to stand still. Rudi shook himself back to reality. A family inheritance he had been told. But it didn't belong to them. Not really. ...read more.

Rudi put his hand down to his left sock and pulled out a gun. 'Just incase,' he thought to himself. He would only use it if there was no chance of escape. He couldn't get caught. His Boss would kill him. Outside the woman was stood next to the car and was biting what was left of her nails. A loud gunshot rang out, echoing in the silence of the street. The woman screamed and the children ducked down in the back of the car. The woman ran into the house, the back door was wide open. She went straight through to the living room. The room was a mess. Chairs had been over turned, pictures knocked off the walls and there were the remains of her ornaments on the floor. The remains of the struggle. Then the woman saw the open door of the safe. 'My jewellery,' she gasped and then she screamed as she saw her husband lying on the floor. There was blood pouring from a hole in his chest. She knew before she touched him that he was dead. She screamed again, knelt against her husband's body, put her head against his chest and sobbed as though she would never stop. ...read more.