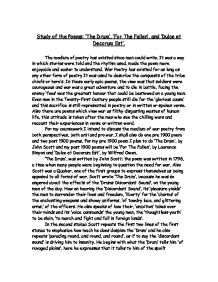 Study of the Poems: 'The Drum', 'For The Fallen', and 'Dulce et Decorum Est'. The medium of poetry has existed since man could write. It was a way in which stories were told and the rhythm used, made the poem more enjoyable and easier to understand. War Poetry has existed for as long as any other form of poetry It was used to describe the conquests of the tribe chiefs or hero's. In these early epic poems, the view was that soldiers were courageous and war was a great adventure and to die in battle, facing the enemy 'foes' was the greatest honour that could be bestowed on a young man. Even now in the Twenty-First Century people still die for the 'glorious cause' and this sacrifice is still represented in poetry or in written or spoken verse. Also there are poems which view war as filthy disgusting wastes of human life, this attitude is taken after the men who see the chilling wars and recount their experiences in verse or written word. For my coursework I intend to discuss the medium of war poetry from both perspectives, both anti and pro war. I shall also do one pre 1900 poem and two post 1900 poems. For my pre 1900 poem I plan to do 'The Drum', by John Scott and my post 1900 poems will be 'For The Fallen', by Laurence Binyon and 'Dulce et Decorum Est', by Wilfred Owen. ...read more.

He also suggests that the death is a 'glory' and that at the death our eyes are filled with tears. In the third stanza Binyon describes how the young men courageously went into battle, so happy, as they 'sang'! He also tells how fit and prepared and quick-witted the men that marched on view were. He also tells us 'they were staunch to the end against odds uncounted'; this means that the young men fought loyally and unwaveringly against an army so great in size it could not be counted by meagre man. In the last line he tells us that even as they died they stood their ground, 'with their faces to the foe'. In the fourth stanza Binyon describes to us that the young men who have died have been fortunate because they have lived all their lives young while those that are left must grow old, or be damned with the boring lives that the soldiers shall never have to bear. He also tells that at every setting and rising of the sun we will remember those who died in the 'cause of the free'. In the fifth stanza we are told they 'mingle not with their laughing comrades, sit no more at the familiar tables of home'; they are still with us in a mysterious, deep manner in the emotions of the country. In the sixth stanza he goes on to emphasize this emotion by saying 'to the innermost heart in their own land they are known, as the stars are known to the night', ...read more.

In the fourth and final stanza he is at a different perspective once again; he is out rightly attacking the people at home who uphold the wars continuance unaware of its true realities. He wishes theses people could see what he sees in his dream, the creature that is no longer human that writhes in desperate pain. Owen goes on to describe the suffering of the soldier; each description is supposed to shock the reader and make them fear war. He then talks about the reason for the poem; he says that he wishes the propagandists, could see the creatures and they would not so readily tell to young men that death for ones country is glorious. Owen wrote this poem as a satirical and ironic reply to people such as Jessie Pope who so willingly tell the youth that death for ones country is sweet. Owen wishes to show that it is not. The differences and contrasts between the poems are very vivid; for example in the 'Drum', Scott refers to the drums sound as being 'discordant' while Binyon in 'For the Fallen' describes the drums sound as a 'thrill'. We also see the affinity between the 'Drum' and 'Dulce et Decorum Est' as they are both anti-war. From these studies I have seen the effectiveness that poetry has of telling a story. The manner in which that poetry is written can totally convince you in the favour of the argument they are making. Although all were effectively convincing I personally found 'Dulce et Decorum Est' most impressive because it contained more striking material; such as Owen's dream. ...read more.