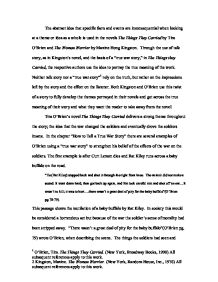 The abstract idea that specific facts and events are inconsequential when looking at a theme or idea as a whole is used in the novels The Things They Carried by Tim O'Brien and The Woman Warrior by Maxine Hong Kingston.

The abstract idea that specific facts and events are inconsequential when looking at a theme or idea as a whole is used in the novels The Things They Carried by Tim O'Brien and The Woman Warrior by Maxine Hong Kingston. Through the use of talk story, as in Kingston's novel, and the basis of a "true war story," in The Things they Carried, the respective authors use the idea to portray the true meaning of the work. Neither talk story nor a "true war story"1 rely on the truth, but rather on the impressions left by the story and the effect on the listener. Both Kingston and O'Brien use this twist of a story to fully develop the themes portrayed in their novels and get across the true meaning of their story and what they want the reader to take away from the novel. Tim O'Brien's novel The Things They Carried delivers a strong theme throughout the story; the idea that the war changed the soldiers and eventually drove the soldiers insane. In the chapter "How to Tell a True War Story" there are several examples of O'Brien using a "true war story" to strengthen his belief of the effects of the war on the soldiers. ...read more.

but they could not do anything about the music, only sit and listen. Eventually "they hear chamber music" (O'Brien pg. 74) and an opera so they call in the air strike. At the end of the story Sanders makes a confession; "Last night I had to make up a few things...There was no glee club...no opera"(O'Brien pg. 75). The specifics of what the soldiers actually herd did not matter to the story, the point was that the war drove the soldiers insane, and Sanders felt that he needed to add the chamber music and the opera to truly express the change the soldiers went through. This is the basis of a "true war story" the device O'Brien relies on to depict the idea that the war altered the soldiers and drove them crazy. The Woman Warrior by Maxine Hong Kingston is a non-fiction story of a Chinese-American girl growing up in California. Throughout the novel Kingston uses the talk stories from her mother to outline what a true woman warrior is and who Maxine's mother expected her to be. The first example of this is the legend of Fa Mu Lan told in the chapter "White Tigers."2 The story tells of the warrior Fa Mu Lan ...read more.

Even if the stories of Fa Mu Lan and of Maxine's mom cutting her tongue are not true they have instilled the principles of who Brave Orchid wants Maxine to become in her. The truth of the story is inconsequential but the lesson that Maxine takes away is invaluable. The idea behind both talk story and "a true war story" is affecting the reader in such a way that the specific facts of the story are insignificant to the meaning and the message that the authors want the reader to take away from the text. In both The Things They Carried by Tim O'Brien and The Woman Warrior by Maxine Hong Kingston the authors use this twist of a story to deliver the central meaning of their respective works. The idea of talk story and "a true war story" is the platform that both novels are written on and the device used to so accurately relate the message to the reader. The Things They Carried vs. The Woman Warrior: The truth, is it really necessary? Caleb Schnarr Tuesday, December 03, 2002 Mr. Hamilton, Period 2 Link Essay Word Count: 1,068 1 O'Brien, Tim. The Things They Carried. (New York, Broadway Books, 1990) All subsequent references apply to this work. 2 Kingston, Maxine. The Woman Warrior. (New York, Random House, Inc. ...read more.