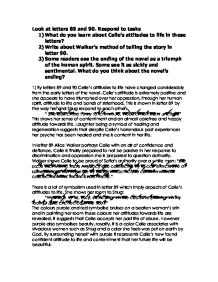 Look at letters 89 and 90. Respond to tasks 1) What do you learn about Celie's attitudes to life in these letters? 2) Write about Walker's method of telling the story in letter 90. 3) Some readers see the ending of the novel as a triumph of the human spirit. Some see it as sickly and sentimental. What do you think about the novel's ending? 1) By letters 89 and 90 Celie's attitudes to life have changed considerably from the early letters of the novel. Celie's attitude is extremely positive and she appears to have triumphed over her oppression, through her human spirit, attitude to life and bonds of sisterhood. This is shown in letter 89 by the way her and Shug respond to each other: " She look at me funny for a minute, I look at her. Then us laugh." This shows her sense of contentment and an almost carefree and happy attitude towards life. Laughter being a symbol of healing and regeneration suggests that despite Celie's horrendous past experiences her psyche has been healed and she is content in her life. In letter 89 Alice Walker portrays Celie with an air of confidence and defiance, Celie is finally prepared to not be passive in her response to discrimination and oppression she is prepared to question authority. Walker shows Celie to be proud of Sofia's authority over a white man: "she scare that white man. ...read more.

It depicts the change from Celie being a naive "innocent narrator" to a confident woman, educated through life and others such as Nettie. The change in Celie's vocabulary and grammatical style suggests she has learnt from Nettie's carefully composed letters. However, letter 90 also shows how Walker does not abandon Celie's mimetic style and her use of the colloquial black American dialect: "This Shug and Albert, I say. Everybody say pleased to Meetcha" Celie continues to include phonetical spellings such as "Meetcha" and to use the present tense for past events such as "I say" instead of I said. Both of these are features of the dialect of the Deep South and show that Walker has continued to express aspects of black American cultural identity through Celie's language throughout the novel. Often throughout history the voices of this community have not been heard and in her method of telling the story Walker allows them to have a voice through Celie's vernacular. The use of the present for past events such as "I say" instead of I said and the absence of speech punctuation also continues to give the novel the feeling of a play script. This first person narrative gives a sense of intimacy and immediacy with events in the novel and Walker continues to gain the closeness of the reader with Celie right until the novel's conclusion. ...read more.

Despite her earlier treatment by "Mr_" they seem, in my opinion, too easily reconciled through the love of Shug: "Us talk about you, I say. How much us love you." This type of language does make aspects of the ending seem sickly and sentimental. However I do feel this reconciliation to be necessary to Alice Walker's purpose and although slightly unrealistic does effectively, in a fairy tale style, show the triumph of human spirit through forgiveness and love. The ending of the novel is in my opinion how most readers wish and hope the novel to end. I do not view the novel as a realist novel, but rather as a novel intended to metaphorically portray the triumph of the human spirit. I agree with the critic Andrea Stuart who said that the novel should not be read as "a realist novel in the ordinary sense" but instead as a fairy/folk tale or fable. The novel's ending advocates ideas that through strength of character, self-acceptance and positive thinking you can achieve freedom and I feel that through Alice Walker showing that black women can achieve, she sets in place a self-fulfilling prophecy inspiring and instilling hope in others, no matter what their background, that it is possible to achieve things within their life. Therefore I see the novel's ending as integral to the story and as an inspiration of hope. ?? ?? ?? ?? ...read more.