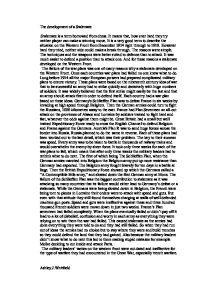 The development of a Stalemate

The development of a Stalemate Stalemate is a term borrowed from chess. It means that, how ever hard they try neither player can make a winning move. It is a very good term to describe the situation on the Western Front from December 1914 right through to 1918. However hard they tried, neither side could make a break through. The reasons were simple. The techniques and the weapons were better suited to defence than to attack. It was much easier to defend a position than to attack one. And for these reasons a stalemate developed on the Western Front. The failure of the war plans was one of many reasons why a stalemate developed on the Western Front. Once each countries war plans had failed no one knew what to do. Long before 1914 all the major European powers had prepared complicated military plans to ensure victory. These plans were based on the nineteenth century idea of war that to be successful an army had to strike quickly and decisively with huge numbers of soldiers. It was widely believed that the first strike might easily be the last and that an army should attack first in order to defend itself. Each country had a war plan based on these ideas. Germany's Schlieffen Plan was to defeat France in six weeks by invading at high speed through Belgium. ...read more.

At first the Military leaders weren't use to this new breed of weapons, but after losing thousands of men they soon realised that the weapons were a lot more efficient and devastating if used in a defensive way, even though the damage had been done. This caused stalemate as each sides defence got so good that it meant that you would have to sacrifice so many lives to gain a few yards. A reason for this was the development of new small arms. The first machine gun named the Gatling gun, had been invented in the eighteen sixty's but it was large and heavy. Smaller, lighter machine guns had been invented by nineteen fourteen which were more effective. Even if they did not have machine guns, soldiers in nineteen fourteen had guns which could fire repeated shots quickly which were nearly as good when used in mass. This changed the nature of warfare as a simple cavalry charge could now be mown down in a matter of minutes. Attacking armies tended to race at the enemy on foot. This made it easy for defenders to shoot down the massed ranks of attackers. This led to a stalemate as military leaders knew that if they attacked they would have heavy casualties. Also armies in nineteen fourteen made use of railways. ...read more.

During the race to the sea terrible battles were fought. The most awful of these battles was the battle of Ypres, although this victory came at an outstanding cost. Even thought the British Expeditionary Force had stopped the Germans from outflanking them they lost so many men. One British division lost three hundred and sixty five of its four hundred officers and ten thousand seven hundred and seventy four of its twelve thousand soldiers. Nobody won the race to the sea so they started to dig trenches to stop the other from advancing. Gradually the lines of trenches lengthened so far that by the end of nineteen fourteen they went from Flanders in Belgium down to Switzerland. It was impossible for either army to move. The sea was the best chance that either side had of breaking past the enemy so when both sides failed it was a big demoralizer for both sides as it meant that the only way they could advance was to storm through the centre of the enemy. It was now a stalemate In conclusion I believe that stalemate developed on the western front mainly because the military leaders weren't prepared for the scale of the battle and the magnitude and destruction of the weapons, but it doesn't come as surprise as no-one at that time could of imagined what the war would be like. This led to them making stupid judgements and too many people getting killed which led to stalemate on the Western Front. Ashley.J.Whitfield ...read more.