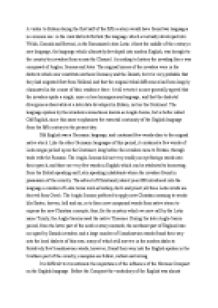 The Development of English in the Anglo Saxon and Norman periods.

﻿A visitor to Britain during the first half of the fifth century would have found two languages in common use: in the rural districts British (the language which eventually developed into Welsh, Cornish and Breton), in the Romanised cities Latin. About the middle of the century a new language, the language which ultimately developed into modern English, was brought to the country by invaders from across the Channel. According to history the invading force was composed of Angles, Saxons and Jutes. The original homes of the invaders were in the districts which now constitute northern Germany and the Danish, but it is very probable that they had migrated first from Holland, and that the original tribal differences had been largely eliminated in the course of their residence there. At all events it is now generally agreed that the invaders spoke a single, more or less homogeneous language, and that the dialectal divergences observable at a later date developed in Britain, not on the Continent. The language spoken by the invaders is sometimes known as Anglo-Saxon, but is better called Old English, since this name emphasizes the essential continuity of the English language from the fifth century to the present day. ...read more.

During the later Anglo-Saxon period, from the latter part of the ninth century onwards, the northeast part of England was occupied by Danish invaders, and a large number of Scandinavian words found their way into the local dialects of this area, many of which still survive in the modern dialects. Relatively few Scandinavian words, however, found their way into the English spoken in the Southern part of the country; examples are fellow, outlaw and wrong. It is difficult to overestimate the importance of the influence of the Norman Conquest on the English language. Before the Conquest the vocabulary of the English was almost entirely native; by the end of the fourteenth century, when Chaucer was writing his Canterbury Tales, about half the words used in English was of foreign origin, through the basic structure of the language remained Germanic. Within a short time after the Conquest all the important positions in the country, both secular and ecclesiastical, had been filled by Normans; for nearly two hundred years the ?upper class? of English society spoke French amongst themselves. ...read more.

From the thirteenth century onwards the upper classes in England made increasing use of English; but, because at first English came less naturally to them then French words partly because the native English vocabulary was somewhat defective in certain fields (notably in those partly from ignorance of the appropriate native term. The numerous French words adopted in this way were fully absorbed into the English language, so much so that many of them cannot easily be recognized as French except by professional students of language. The following words for instance, would scarcely strike the ordinary user of English as being ?foreign?: assets, chair, dance, fur and roast. The extensive acceptance of French words into the vocabulary of English made it easier for words from other foreign languages to be accepted too, and from this time onwards foreign words entered English in abundance. Words were taken not only from French but from the classical languages, from other European languages, and in due course, as more and more of the words became accessible to travellers, from remoter languages as well. ...read more.