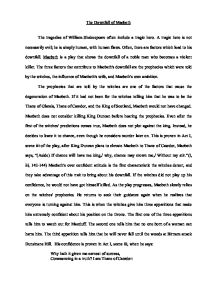 The Downfall of Macbeth The tragedies of William Shakespeare often include a tragic hero. A tragic hero is not necessarily evil; he is simply human, with human flaws. Often, there are factors which lead to his downfall. Macbeth is a play that shows the downfall of a noble man who becomes a violent killer. The three factors that contribute to Macbeth's downfall are the prophecies which were told by the witches, the influence of Macbeth's wife, and Macbeth's own ambition. The prophecies that are told by the witches are one of the factors that cause the degeneration of Macbeth. If it had not been for the witches telling him that he was to be the Thane of Glamis, Thane of Cawdor, and the King of Scotland, Macbeth would not have changed. Macbeth does not consider killing King Duncan before hearing the prophecies. Even after the first of the witches' predictions comes true, Macbeth does not plot against the king. Instead, he decides to leave it to chance, even though he considers murder later on. This is proven in Act I, scene iii of the play, after King Duncan plans to elevate Macbeth to Thane of Cawdor, Macbeth says, "(Aside) If chance will have me king,/ why, chance may crown me,/ Without my stir."(I, iii, 142-144) ...read more.

Her ambition is ignited and she thinks that they can kill the king and make the prophecy an actuality. Lady Macbeth's convincing thoughts are revealed in Act I, scene v, when she says: Glamis thou art, and Cawdor; and shalt be What thou art promis'd. Yet do I fear thy nature; It is too full o' the milk of human kindness To catch the nearest way; thou wouldst be great, Art not without ambition, but without The illness should attend it; what thou wouldst highly, That thou wouldst holily; wouldst not play false, And yet wouldst wrongly win; thou'dst have, great Glamis, That which cries, 'Thus thou must do, if thou have it;' And that which rather thou dost fear to do Than wishest should be undone. (I, v, 14-24) Lady Macbeth is telling Macbeth that he has to do the wrong thing to get what he wants, even though she knows he does not want to commit crimes. She wants the best for her husband but she does not realize that he will get the worst in the end. After Lady Macbeth convinces Macbeth to kill King Duncan, he later regrets his wrongdoings. At this point in the play, the audience can note the change in Macbeth's character. Macbeth's first murder is a tortured experience for him, however, after the first murder, killing seems to be the only solution to maintain his reign over the people of Scotland. ...read more.

Macbeth's over confident attitude gets him killed along with the one person he loved, his wife. If it was not for Macbeth's strong will and passion, he would not have been strong enough to carry out the plan to kill King Duncan, which ultimately leads to his destruction. Shakespeare's Macbeth demonstrates the transition of a person of nobility and respect into a cruel murderer. The witches' prophecies, Lady Macbeth's influence, and Macbeth's own ambition all contribute greatly to the deterioration of his character, which results in his downfall. Macbeth realizes that he has lost everything when he says: To-morrow, and to-morrow, and to-morrow, Creeps in this petty pace from day to day, To the last syllable of recorded time; And all our yesterdays have lighted fools The way to dusty death. Out, out, brief candle! Life's but a walking shadow, a poor player That struts and frets his hour upon the stage, And then is heard no more; it is a tale Told by an idiot, full of sound and fury, Signifying nothing. (V, v, 19-27) This is when Macbeth understands that much of his life is based on "fair is foul and foul is fair"(I, I, 11), which means that evil can triumph over good. He disguises his whole life, the evil that he causes, his insanity, his wife's mental condition, and the fact that he murders people and destroys lives, just to guarantee a seat on the throne and play King of Scotland, which ultimately causes his death. ...read more.