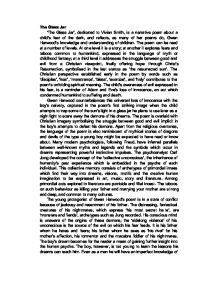 The Glass Jar (Gwen Harwood) Analysis. The Glass Jar, dedicated to Vivian Smith, is a narrative poem about a childs fear of the dark, and reflects, as many of her poems do, Gwen Harwoods knowledge and understanding of children.

The Glass Jar 'The Glass Jar', dedicated to Vivian Smith, is a narrative poem about a child's fear of the dark, and reflects, as many of her poems do, Gwen Harwood's knowledge and understanding of children. The poem can be read at a number of levels. At one level it is a story; at another it explores fears and taboos common to humankind, expressed in the language of myth or childhood fantasy; at a third level it addresses the struggle between good and evil from a Christian viewpoint, finally offering hope through Christ's Resurrection, symbolised in the last stanza as 'the resurrected sun'. The Christian perspective established early in the poem by words such as 'disciples', 'host', 'monstrance', 'bless', 'exorcize', and 'holy' contributes to the poem's unfolding spiritual meaning. The child's awareness of evil expressed in his fear, is a reminder of Adam and Eve's loss of innocence, an act which condemned humankind to suffering and death. Gwen Harwood counterbalances this universal loss of innocence with the boy's naivety, captured in the poem's first striking image when the child attempts to trap some of the sun's light in a glass jar he plans to use later as a night light to scare away the demons of his dreams. The poem is overlaid with Christian imagery symbolising the struggle between good and evil implicit in the boy's attempts to defeat his demons. Apart from the religious overtones, the language of the poem is also reminiscent of mythical stories of dragons and devils of the type a young boy might be expected to have read or know about. Many modern psychologists, following Freud, have inferred parallels between well-known myths and legends and the symbols which occur in dreams representing powerful instinctive impulses. The psychoanalyst Carl Jung developed the concept of the 'collective unconscious', the inheritance of humanity's past experience which is embedded in the psyche of each individual. ...read more.

The boy, through his simple faith in the power of his 'glass jar', reveals his innocence; he thinks and acts as a child yet quests for an understanding of the world as would an adult. Even as an adult however, he will see 'through a glass darkly' as the disciple Paul explains in Chapter Thirteen of his first Epistle to the Corinthians, suggesting that whatever self-knowledge he acquires will be incomplete, an imperfect reflection of his true self. As on 'Alter Ego', a knowledge of the whole self comes at the end of life's journey. The implications of St Paul's Epistle are relevant to both poems. In stanza four of 'The Glass Jar', when the boy discovers the truth about his 'jar of light', his hope falls 'headlong from its eagle height'. In his Epistle, Paul discusses the relative value of faith, hope and love and concludes that faith and hope are of little worth without love. As the boy is motivated by fear and hate his attempt to defeat his demons from a Christian perspective is doomed. In 'Alter Ego', because the poet accepts the path of 'love and pain' in life, she seems assured of gaining complete self-knowledge, of meeting her other self 'face to face' at the end of life's journey. The boy has not consciously acknowledged the existence of another self and is unaware of the lessons his spirit self can teach him, so he must continue to struggle. He gropes for connections between his conscious and unconscious, between the darkness of his dreams and the light of his waking hours, between hatred for his father and love for his mother. It is only in sleep when his conscious mind is at rest, that the spirit self exerts its power. What it reveals is the boy's inner darkness: ...His sidelong violence summoned fiends whose mosaic vision saw his heart entire. ...read more.

Line fourteen declaims 'home, home, home' in he moment of homecoming is at hand, the arrival of a dead son to those humble souls waiting in suburbia. In those last six lines, Dawe paints a stunning portrait of fear, grief and longing. The dogs on ancient verandahs howl at sunset for their lost masters. Like lone sentinels it is their muzzles which are raised 'in mute salute', rather than any jingoistic flag. Then on to the 'wide web' of anonymous suburbs, where 'telegrams tremble like leaves from a wintering tree', an oblique reference to the suffering of their families in whose trembling hands the fateful messages are cradled. Finally, the last image of the 'spider grief' which 'swing in his bitter geometry'. Before such a extraordinary metaphor we are virtually mute. It simply refuses to budge, to yield to critical analysis. Yet we feel that we have been touched at the very limits of imagination, where words are almost out of reach. One critic has said that, once written, there is a kind of inevitability about such images which seem 'reached at the intersection of thought, feeling and language'. Unless we consider it carefully, the last line might seem something of a let-down. But 'bringing them home' takes us back to the first line and, by this deliberate contrivance, reminds us of the idea of homecoming. The interpolated 'now' is what we are left with. Here they are now, presented to us and to their families. By their sheer physical presence they pronounce their fates to us. They are forever suspended in a kind of 'now' time. Too late to have avoided their bitter fate, too early for a 'proper' (living) homecoming, one that might salute their endeavours with joy and with dignity. Dawe's opposition to the Vietnam war never gets caught up in the trivial politics of either side. It focuses instead, with overwhelming force, on the essential tragedy of all wars: the senseless death of young men, the terrible indifference to human life which is the central onscenity of war. This poem is justly one of his most famous. ...read more.