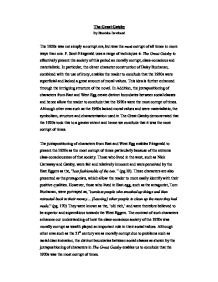 In addition, Wilson compares his eyes to the watchful eyes of God when his wife is killed -"God sees everything" (pg.130). This symbolises how during the 1920s, American spirituality and ideals were corrupted by society's quest for wealth and material possessions. The valley of ashes is also mirrored by George Wilson - it is desolate, desperate and utterly without hope. This further symbolises the moral decay of American society that was hidden by the glittering surface of upper class extravagance that surrounds it. Such clever use of symbolism enables us to conclude that although materialism maybe an attribute of other eras such as the 1960s, the corruption of the American dream, which defined that society, made the 1920s the most corrupt of times. Through his use of characterisation and irony, Fitzgerald presents the idea that the 1920s were shallow and materialistic due to the fact that social mobility and more significantly, happiness was based purely on wealth. The superficiality and money-driven nature of Daisy Buchanan is portrayed through the use of figurative language such as, "her voice is full of money." ...read more.

Furthermore, the ending of the novel powerfully features Gatsby's death. In fact, when Gatsby died, "no one cared," (pg. 156) and many detached themselves from him even though they had previously boasted and raved on about their connections with him. Clearly, such structure effectively enables the reader to conclude that the 1920s not only represented a shallow and superficial era, but also had a great lack of moral values, making it the most corrupt of times. As evident, the 1920s was not simply a corrupt era, but was the most corrupt of all times in more ways than one as shown in The Great Gatsby. F. Scott Fitzgerald combines characterisation with the intriguing use of structure and irony to present this era as shallow, materialistic and having a great lack of moral values. Furthermore, the symbolic representations of the eyes of Dr. T.J Eckleburg and the Valley of Ashes enable the reader to conclude that the American dream, which was so prominent prior to the 1920s, had been destroyed. Even though there was materialism in the 1960s and there is corruption of moral values in today's society, the techniques used in The Great Gatsby show that the 1920s took this to a greater extent and hence we conclude that it is the most corrupt of times. ...read more.