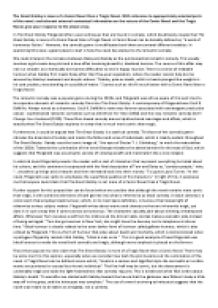 The Great Gatsby is more of a Comic Novel than a Tragic Novel. With reference to appropriately selected parts of the novel, and relevant external contextual information on the nature of the Comic Novel and the Tragic Novel, give your response to the above view.

Transfer-Encoding: chunked ﻿The Great Gatsby is more of a Comic Novel than a Tragic Novel. With reference to appropriately selected parts of the novel, and relevant external contextual information on the nature of the Comic Novel and the Tragic Novel, give your response to the above view. In The Great Gatsby Fitzgerald often uses techniques that are found in comedy, which doubtlessly reveals that The Great Gatsby is more of a Comic Novel than a Tragic Novel. A Comic Novel can be broadly defined as, ?a work of humorous fiction.? However, the comedic genre is multifaceted and there are several different varieties. In examining this view, a good place to start is how the novel has elements of a romantic comedy. We could interpret the romance between Daisy and Gatsby as the quintessential romantic comedy. This usually involves a girl-meets-boy plot and a love affair involving beautiful, idealised heroine. The course of this affair may not run smooth, but eventually overcomes difficulties to end in happy reunion. There is a sense of relatable humour when Gatsby first meets Daisy after their five-year separation, where the reader cannot help but be amused by Gatsby?s awkward and boyish actions: ?Gatsby, pale as death, with his hands plunged like weights in his coat pockets, was standing in a puddle of water.? Scenes such as this fit much better with a Comic Novel than a Tragic Novel. ...read more.

Further support for this proposition can be found when we consider that although the novel remains more comic than tragic, it still combines elements of both genres into what is referred to as black comedy. A black comedy is a comic work that employs black humour, which, in its most basic definition, is humour that makes light of otherwise serious subject matter. Fitzgerald writes about events and characters that are inherently tragic, yet does it in such a way that it comes across as humorous. The characters casually joke about drinking, cheating and affairs. Whenever Tom receives a call from his mistress at the dinner table, Jordan makes a sarcastic joke instead of being outraged: "Tom has got women in New York; she might have the decency not to telephone at dinner time." Black humour is closely related to the even darker form of humour called gallows humour, which is also utilised by Fitzgerald. This is a form of humour that jokes about death and mortality, which is demonstrated when a partygoer flippantly remarks that Gatsby, ?killed a man once.? This is a good example of how Fitzgerald uses black humour to make the novel both comedic and tragic, although more emphasis is placed on the former. ...read more.

Furthermore, another way in which Gatsby displays the hallmarks of a tragic hero is through his experience of anagnorisis, the moment he realises that he is wrong and the dream crumbles around him. For Gatsby, the moment of anagnorisis is when Daisy reveals that she did, in fact, love Tom: ?I did love him once ? but I loved you too.? In his Poetics, Aristotle defined anagnorisis as "a change from ignorance to knowledge, producing love or hate between the persons destined by the poet for good or bad fortune." This is possibly what Gatsby experiences, confirming that The Great Gatsby is more of a tragic novel than a comic novel. However, we must bear in mind that he still expects a phone call from Daisy right until the end ? this could suggest that his anagnorisis was only partial and he was still able to cling onto the remains of his dream. To conclude, after careful consideration we determine that although the novel contains elements of both comedy and tragedy, the comedic element is more apparent. The opposing arguments have some merit but ultimately they fail to realise the true implications and context of The Great Gatsby. ...read more.