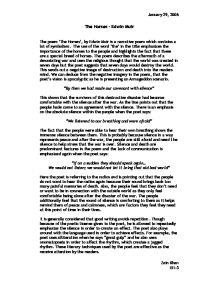 The Horses - Edwin Muir The poem 'The Horses', by Edwin Muir is a narrative poem which contains a lot of symbolism. The use of the word 'the' in the title emphasizes the importance of the horses to the people and highlights the fact that these are a special breed of horses. The poem describes the aftermath of a devastating war and uses the religious thought that the world was created in seven days but the poet suggests that seven days would destroy the world. This sends out a negative image of destruction and death into the readers mind. We can deduce from the negative imagery in the poem, that the poet's vision is apocalyptic as he is presenting an Armageddon scenario. "By then we had made our covenant with silence" This shows that the survivors of this destructive disaster had become comfortable with the silence after the war. As the line points out that the people hade come to an agreement with the silence. ...read more.

These literary techniques used by the poet are effective as the receive attention by the readers. "Sometimes we think of the nations lying asleep, Curled blindly in impenetrable sorrow" The use of the phrase "curled blindly" makes us think about the fetal position, as all humans start their lives 'curled blindly', in the fetal position. This creates the image of a human embryo and the poet is using this phrase to suggest we are waiting for the nations to be born, as they are currently 'lying asleep' grieving over past events. "The tractors lie about our fields... like dank sea-monsters couched and waiting. We leave them where they are and let them rust... We make our oxen drag our rusty ploughs" The fact that the tractors are no longer used and oxen's are used to do farming instead possibly suggests that the war was a nuclear disaster, where technologically everything was wiped out. Thus their lifestyle now is more ancient or primitive, which shows the progress of regression in the war affected economy. ...read more.

The Garden of Eden represents the beginning of a new world and thus the horses represent the starting over of civilization after the devastating war. The horses help in this 'rebuilding process' by helping man with farming, "Since then they have pulled our ploughs and borne our loads". "But that free servitude still can pierce our hearts. Our life is changed; their coming our beginning" The men are using the horses for their work, yet there is still a feeling of sorrow and respect towards the horses. The horses have 'touched' the people with their tenderness and their willingness to help the people. When the world was destroyed, the horses came to help the surviving people. The horses act as saviors and thus the horses which came to help are of a 'special' breed. The poem is an allegory about the aftermath of a nuclear disaster in which the world was destroyed. The poet presents an apocalyptic vision with negative images of destruction but also shows the bond between the horses and men, when the horses act as saviors to the men. ?? ?? ?? ?? January 29, 2006 Zain Khan IB1-3 ...read more.