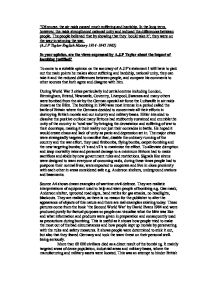 The impact of bombing during WWII

"Of course, the air raids caused much suffering and hardship. In the long term, however, the raids strengthened national unity and reduced the differences between people. The people believed that by showing that they 'could take it'; they were on the way to winning the war. (A.J.P Taylor English History 1914-1945 1965) In your opinion, are the views expressed by A.J.P Taylor about the impact of bombing justified? To come to a suitable opinion on the accuracy of A.J.P's statement I will have to pick out the main points he makes about suffering and hardship, national unity, they can take it and the reduced differences between people, and compare his comments to other sources that both agree and disagree with him. During World War 2 cities particularly industrial centres including London, Birmingham, Bristol, Newcastle, Coventry, Liverpool, Swansea and many others were bombed from the air by the German special air force the Luftwaffe in air raids known as the Blitz. The bombing in 1940 was most intense in a period called the battle of Britain where the Germans decided to concentrate all their efforts in destroying British morale and our industry and military bases. Hitler intended to dissolve the positive outlook many Britons had stubbornly sustained and crumble the unity of the country in 'total war' by bringing the devastation and suffering of war to their doorsteps, making it their reality not just their comrades in battle. He hoped it would create chaos and lack of unity as panic and depression set in. The major cities were strategically targeted to manifest fear, disable the ordinary running of the country and the war effort, they used firebombs, flying bombs, carpet-bombing and the new targeting bombs; v1's and v2's to maximise the effect. To alleviate disruption and keep mortality rates and personal damage to a minimum Britons had to make sacrifices and abide by new government rules and restrictions. ...read more.

The fact the queen is shown as visiting areas of unrest e.g. the east end and declaring how she was going to improve their conditions and protection and then nothing was done about it indicates how some people had right to be bitter to the government and monarchy. This source contains multiple facts but most interestingly suggests how much of the suffering was exemplified by our own countries shoddy and crude protection and that there was a lot of hardship at home that people never realised or concentrated on because the battle suffering on the continent was more prominent. This source attempts to enlighten the audience to how people at home were dealing with their own difficulties caused by the German bombers and heightened due to bad leadership. But also shows how there was unity as people were helping each other and the government was trying to meet the demands and expectations of the people e.g. creating millions of shelters. The video shows an interview with two men during the war who explain how people cooperated and invited strangers into their homes and were learning to accept the differences between each other. This footage agrees with Taylor's comments about strengthened national unity and reduces differences. In whole Cruikshanks review of the home front is more personal than Taylor's summary so is going to express a more mixed opinion. But by selecting only a few examples to suggest his opinion it cannot be a full interpretation of the bombing raids effect on people. Being a video for television it is understandable that it would have to be shocking in some respect to focus people's attention, but also shows it has to be factually correct. Although this detailed research gives a rather gloomy perspective it does show how ordinary people managed to deal with their troubles as a unit and not suffer in silence. I think the main underlying aspect of this video concurs with A.J.P's suggestion of unity, but focuses on the suffering greatly as well to demonstrate the resilience and resourcefulness of the common people. ...read more.

It is very certain that people, especially in the cities suffered a great deal, but it seems in the majority of cases they learned to cope with their personal trauma's and in many cases people co-operated and helped one another. However, some reports challenge this opinion but saying how people still are damaged by the affects of bombing to this very day and that sometimes people after bombing attacks lost hope and became hysterical proving they were unable to deal with the situation. I think the fact A.J.P does not mention the important role propaganda and media played in keeping up morale leaves out a major point that would assist his argument. Also, if he had asserted the fact that his statement was based on a majority and not simply the whole of Britain, he could have justified his opinion more accurately. The issue about reduced differences is also hard to decipher, fore it covers such a huge range of possibilities e.g. race, class, sex, age etc. Certainly the war reduced some differences and due to its catastrophic effect on the country as a whole was bound to increase the rate of the gradual growing equality. But in some cases where people were treated differently over an important matter, the differences, particularly in class became more apparent. A.J.P clearly states how people believed that with a positive attitude they could win the war. This type of comment would apply to Britain at this time as they did all have a common enemy, and most people would obviously think that by showing your not scared you can begin to win the moral fight even if in the battle you are loosing. The fact they were in a total war meant everyone was involved in some way also. Over all I think A.J.P Taylor was fairly justified in his summary, even if he did not include the inevitable inconsistencies that would occur if considering the feelings of a whole nation at one time. ...read more.