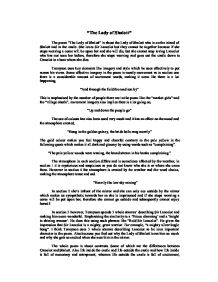 "The Lady of Shalott" The poem "The Lady of Shalott" is about the Lady of Shalott who is on the island of Shalott and in the castle. She loves Sir Lancelot but they cannot be together because if she stops weaving a curse will be upon her and she will die, but she cannot stop loving Lancelot who has not seen her before, therefore she stops weaving and goes out the castle down to Camelot in a boat where she dies. Tennyson uses key elements like imagery and style which he uses effectively to put across his views. Some effective imagery in the poem is mostly movement as in section one there is a considerable amount of movement words, making it seem like there is a lot happening, "And through the field the road run by" This is emphasised by the number of people there are in the poem like the "market girls" and the "village churls", movement imagery also implies there is a lot going on, "Up and down the people go" The use of colours has also been ...read more.

In section 3 however, Tennyson spends 3 whole stanzas' describing Sir Lancelot and making him seem wonderful. Emphasising the similarity to a 'Prince charming' and a 'knight in shining armour'. He does this using such phrases like "Bold Sir Lancelot". He gives the impression that Sir Lancelot is a mighty, great warrior. For example, "a mighty silver bugle hung". I think Tennyson uses 3 whole stanzas describing Lancelot as he is an important character in the poem. Also because you find out why the Lady of Shalott loves him so much and why she gets so excited when she sees him in the mirror. The whole poem is about contrasts. Some of which are the differences between Camelot and Shalott. Also life inside the castle and life outside the castle and how life inside is full of monotony and entrapment, whereas life outside the castle is full of excitement, enjoyment and freedom. How the life she is living inside the castle is a life which is lived by shadows and reflections by the mirror but life outside the castle is 'real life' and is lived how you want it to be lived. ...read more.

The rhythm in this poem is very good as every line rhymes at the end as "quiver" rhymes with "shiver" and "day" rhymes with "gay" and so on. Also at the end of each stanza it ends with either "Shalott", "Camelot" or "Lancelot" which all rhyme, this makes each stanza tie in together nicely at the end. The author uses certain technical devices which make the poem better and more enjoyable to read. An example of a "technical device" is alliteration: "willows whiten" and "reapers reaping", this also gives it more rhythm. Onomatopoeia is also used effectively; the sound has an affect on the atmosphere and the mood in which the character is in, in the following the sound makes the mood happy. "The bridle bells rang merrily" Similes also give you an image in your head of how the text has an affect on the character, "The gemmy bridle glitter'd free, like to some branch of the stars we see" this gives you the image of the bridle being sparkly with gems which were as precious as the stars we see in the night sky, also how they gleamed like a bright star. ...read more.