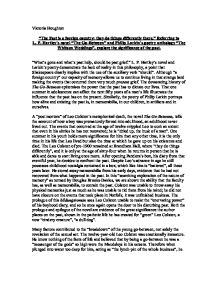 &quot;The Past is a foreign country: they do things differently there.&quot; Referring to L. P. Hartley's novel &quot;The Go-Between&quot; and Philip Larkin's poetry anthology &quot;The Whitsun Weddings&quot;, explore the significance of the past.

Victoria Houghton "The Past is a foreign country: they do things differently there." Referring to L. P. Hartley's novel "The Go-Between" and Philip Larkin's poetry anthology "The Whitsun Weddings", explore the significance of the past. "What's gone and what's past help, should be past grief." L. P. Hartley's novel and Larkin's poetry demonstrate the lack of reality in this philosophy, a point that Shakespeare clearly implies with the use of the auxiliary verb "should". Although "a foreign country" our capacity of memory allows us to continue living in that strange land making the events that occurred there very much present grief. The devastating history of The Go-Between epitomises the power that the past has to dictate our lives. That one summer in adolescence can affect the next fifty years of a man's life illustrates the influence that the past has on the present. Similarly, the poetry of Philip Larkin portrays how alive and existing the past is, in memorabilia, in our children, in artifacts and in ourselves. A "post mortem" of Leo Colston's metaphorical death, the novel The Go-Between, tells the account of how a boy was prematurely forced into adulthood, an adulthood never lived out. The events that occurred at the age of twelve crippled Leo to such an extent that even in his sixties he has not recovered; he is "dried up, the husk of a man". One summer in his youth holds more significance for him than any other time, it is the only time in his life that Leo lived but also the time at which he gave up on his existence and died. The Leo Colston of pre-1900 remained at Brandham Hall, where "they do things differently", and it is only at the age of sixty-four when he returns in person that he is able and dares to start living once more. ...read more.

Yet it is in poems such as Love Songs in Age where Larkin truly observes the role that the past plays in our everyday lives, the ability nostalgic souvenirs have to comfort and move us as well as to disappoint. As in The Go-Between a tatty keepsake is the key to unlocking the past, again memories both fond and painful. The tone of the first verse is very matter of fact, simply informing the reader of how a widow accidentally stumbles upon some old, uncared for songbooks. Although unloved she could not face throwing them away as "they took so little space". The simplicity of the language used complements the everyday value of the subject matter whilst at the same time informing the reader of the domestic situation of the lady in question. The repetition of "One" emphasises the lack of importance that the items held for the widow, but almost as though they knew of their own significance "they had waited". Now however, in the autumn of her life they awaken nostalgic recollections as she vividly remembers "the unfailing sense of being young" and in love. The second stanza of the poem creates an optimistic mood, an illusion of sentimental love that makes her feel youthful once more "like a spring-woken tree". Yet in the closing stanza Larkin's underlying theme of cynicism emerges as the widow realises that the ideal of love portrayed in the song words is merely an illusion. Alliteration emphasises the lack of truth in the promise love makes "to solve, satisfy and set unchangeably in order." In confronting this painful reminder from the past the widow also has to face the reality of the present, the two are entwined. ...read more.

The simplistic repetition in the third stanza "How much...How little..." conveys Larkin's disappointment in himself as he contemplates his own achievements in comparison with those of Dockery. Whereas Leo Colston benefited from his nostalgic visit to the past it has been a negative experience for Larkin who should never have returned. Both Larkin and Hartley present philosophies on the past in two contrasting but equally effective genres, which themselves give insight into the pasts of the authors. The past is, as both pieces of literature show, inevitably significant to us all. How we are affected by it however, either negatively or positively, is to some extent in our own hands. "Even a god cannot change the past" (Agathon 445 BC) yet we can move on, learn from our experiences and in the future be "less deceived". L. P. Hartley's novel is a message to us all that we should not dwell on what has come before, but concentrate on living the present, Leo recognized that he "should not be sitting alone" before it was too late. In reality the past does not fully exist; in the words of Larkin it is a "love song" that can never sound the same, a "locked" door which we can never be reopened, "only an attitude" that lives on in our minds. We may try to capture moments and emotions in stone, or in verse yet the only place where they truly exist is in our memory. We have the ability to dictate the significance the past holds for us. And so whilst we cannot change our pasts, we have the ability to change our future; Shakespeare declared that "What's past is prologue" yet we can determine what is contained in the epilogue. 2870 ...read more.