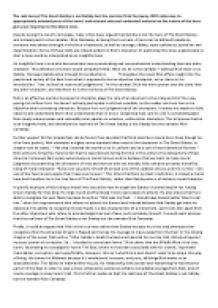 The real hero of The Great Gatsby is not Gatsby but the narrator Nick Carraway. With reference to appropriately selected parts of the novel, and relevant external contextual material on the nature of the hero, give your response to the above view.

Transfer-Encoding: chunked ﻿The real hero of The Great Gatsby is not Gatsby but the narrator Nick Carraway. With reference to appropriately selected parts of the novel, and relevant external contextual material on the nature of the hero, give your response to the above view. Despite being the novel?s namesake, many critics have argued that Gatsby is not the hero of The Great Gatsby, and instead point to the narrator, Nick Carraway, as being the true hero. A hero can be defined broadly as someone who shows strength in the face of adversity, as well as courage, vitality, resourcefulness, optimism and determination. Some of these traits are indeed evident in Nick?s character. In examining this view, a good place to start is how could be interpreted as an insightful hero. An insightful hero is one who demonstrates more penetrating and comprehensive understanding than any other character. This definition of a hero would certainly fit Nick. After all, he is the narrator ? without Nick there is no Gatsby. He keeps Gatsby alive through his recollections. Throughout the novel Nick offers insight into the people and society of the East from what it supposed to be an objective standpoint, as he claims in his introduction: "I am inclined to reserve all judgements." As the narrator, Nick has more power over the story than any other character, and therefore he is the real hero of The Great Gatsby. ...read more.

This ability to leave behind his job, his relationship with Jordan and everything he had become part of in the East in order to seek a more wholesome existence exhibits remarkable courage from Nick, and of course courage is a key heroic trait. This is further evidence that the real hero of The Great Gatsby is not Gatsby but the narrator Nick Carraway. Nick does not grow or change as a character during the novel -- because the growth has already occurred before he sat down to tell the tale. He tells the tale from the position of someone who has already examined his role and reaction, and come to forgone conclusions. "Gatsby turned out all right at the end" - this and other conclusions outlined by Nick in the first pages are borne out his telling of the story. Nick is in many ways a changed man since his time in the East. In light of this, it perplexes me that anyone could claim that Nick is not the true hero of The Great Gatsby On the other hand, those that oppose my view suggest that Gatsby is indeed both the hero and protagonist of The Great Gatsby, and that Nick is little more than a passive flaneur for most of the novel. There may be some merit to this opinion, especially if we consider that Gatsby is the quintessential caricature of the tragic hero. In tragedy, the hero?s downfall is due to combination of external circumstances and internal flaws. ...read more.

A moral hero is a character of good moral values that believes in the dignity and value of humanity. Of course Gatsby has his moral flaws, but the moral hero does not necessarily have to be perfect in every regard. Gatsby is certainly a good deal more moral than many of the characters that surround him. To quote Nick: ??They're a rotten crowd,? I shouted across the lawn. ?You're worth the whole d**n bunch put together.?? The "rotten crowd" to whom Nick is referring are the rich characters such as the Buchanans, Tom and Daisy, who run away from their problems and hide behind their money. Nick points out that even a liar and criminal like Gatsby is better than the other liars and criminals because of his boyish romantic dreams. His desires are focused on ideals (like love) instead of materialism, and he did the honourable thing in waiting and sacrificing himself for Daisy, his holy grail. This sliver of morality is enough to claim that Gatsby could be the real hero of The Great Gatsby, instead of the narrator Nick Carraway. In conclusion, it seems reasonable to believe that the real hero of The Great Gatsby is not Gatsby but the narrator Nick Carraway. However, it is a stretch to call any of the characters a hero in the traditional sense. It could be argued that Fitzgerald has written a novel where there are no heroes, only anti-heroes. The opposing arguments have some merit but ultimately they fail to realise the true implications and context of The Great Gatsby. ...read more.