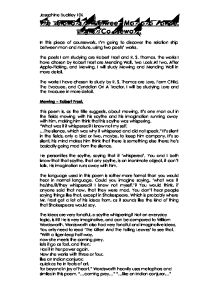 The Relationship Between Man and Nature in the poems of Robert Frost and R.S. Thomas

The Relationship Between Man and Nature. English Coursework. In this piece of coursework, I'm going to discover the relation ship between man and nature, using two poets' works. The poets I am studying are Robert Frost and R. S. Thomas. The works I have chosen by Robert Frost are Mending Wall, Two Look At Two, After Apple-Picking, and Mowing. I will study Mowing and Mending Wall in more detail. The works I have chosen to study by R. S. Thomas are Lore, Farm Child, The Evacuee, and Cynddlan On A Tractor. I will be studying Lore and The Evacuee in more detail. Mowing - Robert Frost. This poem is, as the title suggests, about mowing. It's one man out in the fields mowing with his scythe and his imagination running away with him, making him think that his scythe was whispering. "What was it it whispered? I know not my self. ...The silence, which was why it whispered and did not speak." It's silent in the fields, only a bird or two, maybe, to keep him company. It's so silent, his mind makes him think that there is something else there; he's basically going mad from the silence. He personifies the scythe, saying that it 'whispered'. You and I both know that that scythe, that any scythe, is an inanimate object, it can't talk. ...read more.

sees it as unproductive, and un-needed. The two neighbours disagree, but they don't voice their sides of the argument. They both feel that it is best not to start a fight, as there were probably no other people around for miles. "He is all apple, and I am all pine." The same person who wrote this could not have written After Apple Picking, as the person in that poem owns a whole orchard of apple trees, thereby making both poems contradict. Anyway. I'm going off on a tangent. Mr. Frost is saying that there is no point in having the wall, as they had two different types of wall. They are not going to encroach on each other's land. "Something there is that doesn't love a wall." He is saying that as the wall gets knocked down, there is no point in rebuilding it. He is a pessimist at heart too. "What's the point? It'll only fall again." The language is slightly less formal than 'Mowing', but still more formal than you would hear in everyday speech. It's still quite Shakespearean, which makes me think again that Mr. Frost got a lot of his ideas for his language from Shakespeare. The ideas are less fanciful, but still more fanciful than I am prepared to accept. "Something there is that doesn't love a wall." ...read more.

A new child suddenly appearing on your stairs when you had been used to just the people who were sitting in your kitchen as your company? Kind of disconcerting, isn't it? Gradually, under the supervision of the farm hands, she grows up, and takes over a couple of jobs on the farm. She did probably not want to go home after this, the city is nothing compared to the peace and tranquillity of the countryside. I know I wouldn't. I like this poem, as it is very historically accurate, as Mr. Thomas lived through the war. And the feelings of the girl at the beginning were very accurate too. Wartime is not a very pleasant thing to write about, but Mr. Thomas makes it positive. There is not much of this fanciful-ness that you get with one of Mr. Frost's poems, but it is still told through the eyes of a child. The language is quite formal, being set in wartime, and again, cannot really be compared to any other poet. Conclusion. I think that Mr. Frost depicts nature better, but that Mr. Thomas writes more believable poems. Overall, I prefer Shakespeare to either of the poets, but Mr. Thomas is a much better poet. And I also feel that the relationship between man and nature is something that will always be written about. What is true now, or what I've written here may not be what the next generation writes about, or may not be what is true in the years to come. Josephine Buckley 10K ...read more.