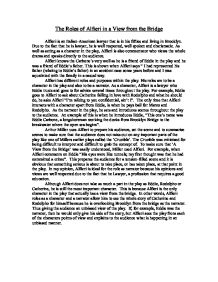 The Roles of Alfieri in a View from the Bridge

The Roles of Alfieri in a View from the Bridge Alfieri is an Italian-American lawyer that is in his fifties and living in Brooklyn. Due to the fact that he is lawyer, he is well respected, well spoken and charismatic. As well as acting as a character in the play, Alfieri is also commentator who views the whole drama and speaks directly to the audience. Alfieri knows the Carbone's very well as he is a friend of Eddie in the play and he was a friend of Eddie's father. This is shown when Alfieri says " I had represented his father (relating to Eddie's father) in an accident case some years before and I was aquatinted with the family in a casual way. ...read more.

The only time that Alfieri interacts with a character apart from Eddie, is when he pays bail for Marco and Rodolpho. As the narrator in the play, he sets and introduces scenes throughout the play to the audience. An example of this is when he introduces Eddie, "This one's name was Eddie Carbone, a longshoreman working the docks from Brooklyn Bridge to the breakwater where the open sea begins". Arthur Miller uses Alfieri to prepare his audience, set the scene and to summarise scenes to make sure that the audience does not miss out on any important parts of the play like one of Millers earlier plays called the 'Crucible'. ...read more.

Although Alfieri does not take as much a part in the play as Eddie, Rodolpho or Catherine, he is still the most important character. This is because Alfieri is the only character in the play that actually has a view from the bridge. In other words, Alfieri roles as a character and a narrator allow him to see the whole story of Catherine and Rodolpho for himself because he is overlooking Brooklyn from the bridge as the narrator. Thus giving the audience an unbiased view of the play. If, for example, Eddie was the narrator, then he would only give his side of the story, but Alfieri sees the play from each of the characters points of view and explains to the audience what is happening in an unbiased manner. ...read more.