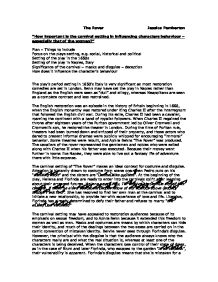 The Rover - How important is the carnival setting in influencing characters behaviour - especially that of the women?

The Rover Jessica Pemberton "How important is the carnival setting in influencing characters behaviour - especially that of the women?" Plan - Things to include Focus on the plays setting, e.g. social, historical and political Setting of the play in the 1650s Setting of the play in Naples, Italy Significance of the carnival - masks and disguise - deception How does it influence the character's behaviour The play's period setting in 1650's Italy is very significant as most restoration comedies are set in London. Behn may have set the play in Naples rather than England as the English were seen as "dull" and stingy, whereas Neapolitans are seen as a complete contrast and less restrained. The English restoration was an episode in the history of Britain beginning in 1660, when the English monarchy was restored under King Charles II after the interregnum that followed the English civil war. During his exile, Charles II had been a cavalier, roaming the continent with a band of royalist followers. ...read more.

Hellena says " Nay, I'm resolved to provide myself this carnival, if there be e'er a handsome proper fellow of my humour above ground, though I ask first". She has resolved to find her own man at the carnival and to initiate a new relationship, to provide her with experience of love and life. Likewise, Florinda has already determined to defy their father and refuses to marry "the elderly don vincentio" The carnival setting may have appealed to restoration audiences because of its emphasis on sexual freedom, and to Aphra Behn because it extended this freedom to women as well as men. Masks and costumes are means by which characters can hide their identity, and much of the dealings between the two sexes are carried on in the comic convention of mistaken identity. Belvile never sees through Florinda's disguise. However, the principal with the disguise is that the audience always knows who the characters really are and what the real situation is, whereas at least one of the characters is being deceived. ...read more.

The moment of recognition is always one of high comedy in the theatre. I think the carnival setting allows for freedom of movement for the female characters as they are able to hide their indentity. At the beginning of the play, Hellena is destined to become a nun, whilst Florinda is forced into marriage. At this time society was male dominated, and women had little opportunity to do as they wished. The carnival setting allows the women to disguise themselves, and to cause confusion and mayhem amongst the males. It also allows the opportunity to break down social and moral parameters, as well as restrictions imposed by gender. The carnival allows Hellena to meet Willmore, whom she believes is a perfect match for her and so does not go to live in a convent. Likewise, Florinda is able to marry Belvile. This world, where women can take the initiative, is the world of the carnival. It is a time of misrule; everything is turned upside down; prohibitions are temporarily removed, and priviledges and ranks suspended. Everyone, however different, can be integrated by joining in. ...read more.