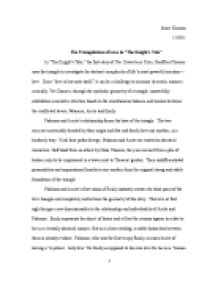 The Triangulation of Love in The Knights Tale

﻿Jaime Korman 11/3/11 The Triangulation of Love in ?The Knight?s Tale? In ?The Knight?s Tale,? the first story of The Canterbury Tales, Geoffrey Chaucer uses the triangle to investigate the abstract complexity of life?s most powerful emotion?love. Since ?love is law unto itself,? it can be a challenge to examine its erratic nuances critically. Yet Chaucer, through the symbolic geometry of a triangle, masterfully establishes a narrative structure based on the simultaneous balance and tension between the conflicted lovers, Palamon, Arcite and Emily. Palamon and Arcite?s relationship forms the base of the triangle. The two men are inextricably bonded by their origin and fate and dearly love one another, in a brotherly way. Until their paths diverge, Palamon and Arcite are treated as identical characters. Half dead from an attack by Duke Theseus, they are rescued from a pile of bodies, only to be imprisoned in a tower next to Theseus? garden. Their undifferentiated personalities and unquestioned loyalty to one another form the original strong and stable foundation of the triangle. ...read more.

Just before the inevitable battle, they each choose a different god to hear their prayers. Arcite asks Mars for help to win the battle, while Palamon asks Venus to help him win Emily?s heart. Through their choice in gods, at this time of great turmoil, both friends? motives are exposed. Arcite desires the glory that comes with the victory for Emily?s hand, while in contrast, Palamon simply wants Emily in the spirit of love. These contradicting motives are reinforced later as Arcite triumphantly rides to Theseus, rather than to Emily, his prize. In doing so, he falls on his chest, killing himself. His self-aggrandizing action suggests Arcite is more motivated by the prestige granted to him by Theseus, than by his love for Emily, which the reader was misled to believe in. To emphasize this point, his unorthodox death symbolizes that he died at Venus?s hand?the hand of love. By comparison, the unwavering devotion of Palamon for Emily suggests that true love cannot only endure but triumph in the most hopeless of circumstances. ...read more.

One of the primary themes of "The Knight's Tale" is the seeming randomness of fate. This tale depicts two characters that are fundamentally the same, but come to very different ends. It seems a person's character has very little to do with fate ? and change is something that must be accepted, as it is outside of personal control. Love is the most powerful, yet mysterious human emotion. It is love that governs our relationships and therefore, by extension, governs our society. Furthermore, the abstraction that surrounds love adds to its power. The unknown does not only induce man to fear, but also to desire?love?s greatest avatar. In The Canterbury Tales, and more specifically ?The Knights Tale,? Geoffrey Chaucer embraces the unknown and tackles love head on. Through Palamon, Arcite, and Emily?s intricate love triangle, Chaucer advocates love?s power. The emotional tensions that exist between the lovers are reflected symbolically in the quantitative properties of triangles. In the end, the endurance of the conflicted three-way relationship, holding the characters both together and apart, proves that love is an unwavering force that conquers all. ...read more.