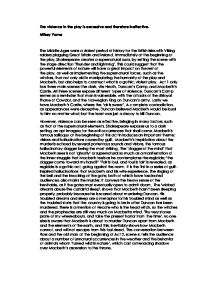 The violence in the play is excessive and therefore ineffective. Is this view of &quot;Macbeth&quot; accurate?

The violence in the play is excessive and therefore ineffective. Mikey Yome The Middle Ages were a violent period of history for the British Isles with Viking raiders plaguing Great Britain and Ireland. Immediately at the beginning of the play, Shakespeare creates a supernatural aura, by setting the scene with the stage direction "Thunder and lightning". This could suggest that the powerful elements of nature will have a great impact on the rest of the play, as well as implementing the supernatural forces, such as the witches, that not only aid in manipulating the humanity of the play and Macbeth, but also helps to construct what is a gothic, violent play. Act 1 only has three main scenes: the dark, vile Heath, Duncan's Camp, and Macbeth's Castle. All three scenes expose different types of violence. Duncan's Camp serves as a reminder that man is vulnerable, with the attacks of the disloyal Thane of Cawdor, and the Norwegian King on Duncan's army. Lastly we have Macbeth's Castle, where the 'air is sweet'. A complete contradiction, as appearances were deceptive. Duncan believed Macbeth would be loyal to him no matter what; but the feast was just a decoy to kill Duncan. ...read more.

The conversation between Ross and the old man at the beginning of Act 2, scene 4, tells the audience about a number of unnatural occurrences in the weather and the behavior of animals whom 'turned wild in nature', which cast a menacing shadow over Macbeth's ascension to the throne. Lady Macbeth can be seen as a violent character; she speaks to the spirits and we see a evil presence here, "come you spirits that tend on mortal thoughts, unsex me here, and fill me from the crown to the toe top-full of direst cruelty, make my blood thick", this means she wants to feel so remorse or humanity and she wants nothing to stop her from committing the crime Shakespeare includes juxtaposed images to create visual imagery of Lady Macbeth standing on her own on stage speaking to the spirits. This is where we see Lady Macbeth as a fiend like queen, as she shows she wants power and opposition. When Macbeth arrives back to the castle Lady Macbeth begins her plan to make sure that when Duncan arrives to their castle he shall not leave again, "O never, shall sun that morrow see". ...read more.

Their predictions, 'King hereafter', deliberately set up a confrontation between Macbeth and his friend Banquo. With the seeds of ambition now planted, Macbeth's thoughts are twisted into a sudden need to become King. The seeds were then again replanted when Duncan named his son Malcolm heir to his throne. His metamorphosis toward evil causes Maxbeth's great inclination toward killing his threats. However some of his actions of evil for the sake of evil, like murdering Lady Macduff and all the inhabitants of the castle, expose his violent behaviour, as well as madness. At the end of the play Macbeth is totally alone. He has lost all his friends, he is universally despised, his wife is dead, and all his most eager hopes have been disappointed. He is a man without a place in the social community and has become totally isolated. Therefore we feel it is a fitting ending to his character, which routed for foul and not fair. Ultimately you can say that the violence in the play is extremely excessive, but with regards of it being ineffective, I disagree; the theme of violence paves the way for main characters to evolve into rouges, or heroes, through Psychological Audience Manipulation, as well as, expose many other different themes, as is that of the supernatural. ...read more.