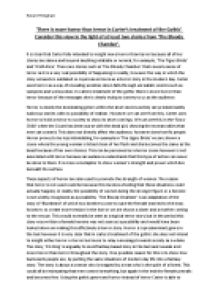 There is more horror than terror in Carters treatment of the Gothic Consider this view in the light of at least two stories from The b****y Chamber.

﻿Robert Fillingham ?There is more horror than terror in Carter?s treatment of the Gothic? Consider this view in the light of at least two stories from ?The b****y Chamber?. It is clear that Carter fully intended to insight more horror than terror because all of her stories are above and beyond anything relatable or normal, for example, ?The Tigers Bride? and ?Wolf-Alice?. There are stories such as ?The b****y Chamber? that reveal a sense of terror as it is a very real possibility of happening in reality, however the way in which the story unravels is outdated so is perceived more as a horror story in the modern day. Carter uses horror as a way of revealing societies down falls through unrealistic events such as vampires and werewolves. ...read more.

This can be perceived as a horror scene however is not associated with terror because an audience understands that this type of action can never be done to them. It is more a metaphor to show women?s strength and power which lies beneath the surface. These aspects of horror are also used to promote the strength of women. The reason that terror is not used could be because this invokes a feeling that these situations could actually happen; in reality the possibility of women being the stronger figure or a heroine is not widely recognised as a possibility. ?The b****y Chamber? is an adaptation of the story of ?Bluebeard? of which two brothers come to save the female married to the man, however, to create more tension in the horror we are shown a sister and a mother coming to the rescue. ...read more.

This could all be insinuating that men control everything, but again in the end the female prevails and becomes free. Using the gothic genre and horror instead of terror Carter is able to give a more potent message to people instead of trying to terrorise them into noticing the messages she may be trying to get across. Overall, Carter uses Horror in the Gothic genre gives insight into clear messages she is trying to get across. She uses horror more than terror as the latter has a profound effect on the audience and may turn them away from the stories prior to receiving the full impact of what she is trying to demonstrate. Horror is a more calm and entertaining way of providing an audience with all the thrill they may be looking for without the lingering fear of realism that comes with terror in the gothic genre. ...read more.