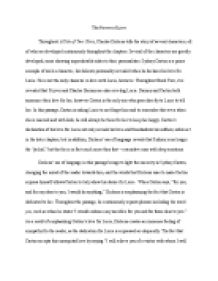 Throughout A Tale of Two Cities, Charles Dickens tells the story of several characters, all of who are developed continuously throughout the chapters

﻿The Power of Love Throughout A Tale of Two Cities, Charles Dickens tells the story of several characters, all of who are developed continuously throughout the chapters. Several of the characters are greatly developed, some showing unpredictable sides to their personalities. Sydney Carton is a prime example of such a character, his delicate personality revealed when he declares his love for Lucie. He is not the only character in love with Lucie, however. Throughout Book Two, it is revealed that Stryver and Charles Darnay are also coveting Lucie. Darnay and Carton both announce their love for her, however Carton is the only one who goes directly to Lucie to tell her. In this passage, Carton is asking Lucie to not forget him and to remember that even when she is married and with kids, he will always be there for her to keep her happy. Carton?s declaration of his love for Lucie not only reveals his love and foreshadows his selfless, noble act in the later chapters, but in addition, Dickens? use of language reveals that Sydney is no longer the ?jackal,? but that he is in fact much more than that ? a sensitive man with deep emotions. Dickens? use of language in this passage brings to light the sincerity in Sydney Carton, changing the mood of the reader towards him, and the words that Dickens uses to make Carton express himself allows Carton to truly show his desire for Lucie. ...read more.

Because Sydney Carton is put down, not only by others but by himself as well, throughout the entire first half of the second book, when he declares his love for Lucie in such an unselfish and loving manner, it changes how Carton is viewed. Since Stryver takes all the credit for being successful even though Carton does all the work, it is written, “…although Sydney Carton would never be a lion, he was an amazingly good jackal” ï¨116). Carton even describes himself to Darnay as “I am a disappointed drudge, sir I care for no man on earth, and no man on earth cares for me,” exhibiting Carton’s own self-pity and sadness for the world ï¨113). However, with this passage, Sydney Carton causes any reader to fully disregard any judgments made for his character. Dickens previously portrayed him as this unfortunate man without anything to live for, but now it is revealed that Carton does indeed have someone to live for – Lucie and her happiness. This passage causes all previous opinions about Sydney Carton to be discarded, as now Sydney Carton is no longer the jackal, but he has turned into the lion. In addition to revealing the compassionate and eloquent side of Sydney Carton, this passage is also a moment of foreshadowing for Carton’s noble and unselfish act of sacrificing himself for Lucie’s happiness. ...read more.

kept true to his word about giving his life “to keep a life you love beside you” makes him all the more noble ï¨204). I thought that this passage was really a turning point for Sydney Carton’s character, since up to that point he had been very reserved and inarticulate, but when he went to speak to Lucie he became this eloquent speaker, driven by a strong love. From then on, we continue to see Carton’s character develop, creatively seeking out the apothecary for the substances in order for the plan to work. He acted without a moment’s hesitation, and that “[his face] was the peacefullest man’s face ever beheld there” shows that he had absolutely no regrets about his sacrifice ï¨4ï¹ï¹). To be that calm when he is about to be the newest victim of the Guillotine is a daunting task in itself, but to have someone who would sacrifice his or her life just for someone else’s happiness is beyond imaginable. Therefore, this passage sets the stage for Carton’s ultimate sacrifice, making Carton no longer a “disappointed drudge,” but a noble hero who goes from being a friend to Darnay and the Manettes to becoming their savior. There is no greater sacrifice that Carton could have made, and for it all to be because he loved Lucie unconditionally is a pretty incredible thing. ...read more.