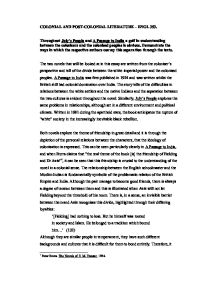 Throughout July's People and A Passage to India a gulf in understanding between the colonisers and the colonised peoples is obvious. Demonstrate the ways in which the respective authors convey this separation through the texts.

COLONIAL AND POST-COLONIAL LITERATURE - ENGL 353. Throughout July's People and A Passage to India a gulf in understanding between the colonisers and the colonised peoples is obvious. Demonstrate the ways in which the respective authors convey this separation through the texts. The two novels that will be looked at in this essay are written from the coloniser's perspective and tell of the divide between the white imperial power and the colonised peoples. A Passage to India was first published in 1924 and was written whilst the British still had colonial domination over India. The story tells of the difficulties in relations between the white settlers and the native Indians and the separation between the two cultures is evident throughout the novel. Similarly, July's People explores the same problems in relationships, although set in a different environment and political climate. Written in 1981 during the apartheid state, the book anticipates the rupture of "white" society in the increasingly inevitable black rebellion. Both novels explore the theme of friendship in great detail and it is through the depiction of the personal relations between the characters, that the ideology of colonisation is expressed. This can be seen particularly clearly in A Passage to India, and when Burra claims that "the real theme of the book [is] the friendship of Fielding and Dr Aziz"1, it can be seen that this friendship is crucial to the understanding of the novel in a colonial sense. The relationship between the English schoolmaster and the Muslim Indian is fundamentally symbolic of the problematic relation of the British Empire and India. Although the pair manage to become good friends, there is always a degree of tension between them and this is illustrated when Aziz will not let Fielding beyond the threshold of his room. There is, in a sense, an invisible barrier between them and Aziz recognises this divide, highlighted through their differing loyalties: '[Fielding] had nothing to lose. ...read more.

On the surface, they use terminology to express the inability for the other native group to be able to understand. In July's People this is particularly evident through the broken English used by the black characters. The opening line of the book captures the difficulties of understanding that grow between the races throughout the novel: 'You like to have some cup of tea?- July bent at the doorway and began that day for them as his kind has always done for their kind.' July's English is pidgin and limited and we learn that Maureen has spent fifteen years using 'very simple, concrete vocabulary' (72) with him. This fundamental difference in language will inevitably cause communication problems and it is from this lack of interaction that the deficiency in understanding of one another's culture stems. Gordimer also incorporates Afrikaans speech in the novel: ' - he called up to the man on the roof in the way his people did, teasing and encouraging, the first part of what he said gabbled and rapid, the syllables of the last word strongly divided and drawn out, the word itself repeated. Mi ta twa ku nandziha ngopfu, swi famba a moyeni. Ncino wa maguva lawa, hey-i...hey-i!' (141) The presence of this in the novel highlights to the reader the division between the whites and the blacks - the visual presence of this unknown language on the page drives home the communication problems present in the mixed community. In a similar way Forster incorporates some Indian words into the text, when there is no suitable English words to describe the Indian feature. For instance, he refers to the 'Bhil,' which is a word used to describe a member of a Central Indian people consisting mainly of aboriginal hunting tribes and uses the term 'Nawab,' which is an Indian title of nobility. The fact that such words do not exist in English, or do not have a precise translation, is indicative of the gulf in cultures between the Indians and the whites and, naturally, this goes some way towards explaining the lack of understanding between the races. ...read more.

Dover acknowledges this fact: 'Forster, from the self-confessed perspective of the enlightened Western visitor, suggests that the Caves themselves are symbolic of the..."otherness" of India itself: complex, ungovernable, bewildering, enigmatic...'11 Therefore, although Forster does see himself as being 'enlightened', his paranormal and mysterious portrayal of the caves suggests that he encountered difficulties in both understanding and expressing the Indian culture to his white readers. He has been successful in so far as he has captured the different cultures, but he has not necessarily done this in a non-biased way - the supernatural element of the caves point towards him seeing India and therefore its people as 'the other'- 'that which is unfamiliar and extraneous to a dominant subjectivity.'12 Therefore, the effect produced by the two authors can be viewed in two distinct manners. The first is that they are deliberately portraying the separation and lack of understanding between the two cultures and, as such, are being actively reproachful of this and the second is that the lack of understanding that is conveyed in the novels is representative of their own inability to relate to the other ethnic group. Many issues underlie this question, although it could be suggested that the benefit of the doubt aught to be given to the respective authors who are striving to represent the countries effectively and fairly, despite the problems explored such as the adequacy of the English language in conveying both India and black South Africa. In conclusion, in both of the texts the authors use many techniques in order to convey the lack of understanding between the imperialists and the colonised peoples in the respective countries. However, as both of the writers are members of that colonising group in effect, the extent to which this division was conveyed intentionally by the authors has to be questioned. Ironically, through reading the texts from a colonial perspective, it could be deemed that the apparent differences surface because of a real lack of understanding on the part of the authors themselves. ...read more.