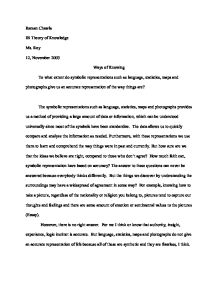 To what extent do symbolic representations such as language, statistics, maps and photographs give us an accurate representation of the way things are?

Raman Chawla IB Theory of Knowledge Ms. Roy 12, November 2003 Ways of Knowing To what extent do symbolic representations such as language, statistics, maps and photographs give us an accurate representation of the way things are? The symbolic representations such as language, statistics, maps and photographs provides us a method of providing a large amount of data or information, which can be understood universally since most of the symbols have been standardize. The data allows us to quickly compare and analyze the information as needed. Furthermore, with these representations we use them to learn and comprehend the way things were in past and currently. But how sure are we that the ideas we believe are right, compared to those who don't agree? How much faith can, symbolic representation have based on accuracy? The answer to these questions can never be answered because everybody thinks differently. But the things we discover by understanding the surroundings may have a widespread of agreement in some way? For example, knowing how to take a picture, regardless of the nationality or religion you belong to, pictures tend to capture our thoughts and feelings and there are some amount of emotion or sentimental values to the pictures (Essay). ...read more.

But the problem with having a homogenous language is that there would still not be an accurate representation about things. For example, English is derived from Anglo-Saxons, but it has been modified several times before it reached twenty first century. Language also signifies power, and with this power, there are two types of languages positive and negative that can have different affect on people and the society. Therefore, symbolic representation won't be accurate, because the interpretation would be different in many ways, in a homogenous language (Essay). For many years, captains of various boat and vessels have used maps and compasses as symbolic representations to obtain accurate information regarding their journey. However, today society, maps are a necessary part for traveling, either by sea, air or on land. The biggest problem with maps is that it doesn't at time provide accurate representation. For example, during the 1492 almost everyone was sure that between Europe and India there was nothing but water. However, when Columbus borrowed money from the Queen, and went out to explore and he discovered America. From Europe to America, Columbus did not find anything land or continents. How sure are we that Columbus missed a small island in the Atlantic Ocean? ...read more.

Symbolic representation is also known as statistic, therefore, it is suppose to be accurately represented of how things should be interpreted. So, how precise are statistic? Reality is seen through statistics. But how do we know what reality really is? Who really knows what reality is? Each day is a mystery and at the end we have unanswered questions, about what the past, present, and what the future hold for us. No one really knows if it's an illusion or a dream. Statistics aren't accurate mainly because they are examined by several of people, so the views will also change the representation of how things are viewed as. Also statistics are numbers and personal situations, which are represented through the simplifications frequently made by people. Therefore, a precise perception of reality is not possible, when we get an idea of fact (Essay). One of the most successful ways to comprehend the world we live in, can be best described by the symbolic representation such as language, statistics, maps and photographs, even though they don't give an accurate representation of actuality. Many symbolic representations may be unfair, badly denoted or mistakenly intentioned, but it is up to us to attempt to understand them in the finest way we can in order to get a little bit closer to what we think reality really is (Essay). ...read more.