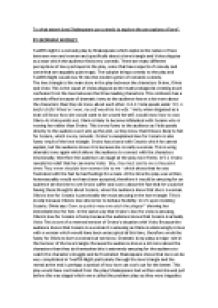 To what extent does Shakespeare use comedy to explore the perceptions of love in Twelfth Night?

﻿To what extent does Shakespeare use comedy to explore the perceptions of love? BY GEORGINA WADSLEY Twelfth night is a comedy play by Shakespeare which explores the nature of love between men and women and specifically about a love triangle and Violas disguise as a man which the audience finds very comedic. There are many different perceptions of love portrayed in the play, some that have aspects of comedy and some that are arguably quite tragic. The subplot brings comedy to the play and Twelfth Night would now fit into the modern genre of romantic comedy. The love triangle is the main story in the play between the characters Orsino, Olivia and Viola. This is the cause of Violas disguise as the male protagonist creating much confusion from the love between the three leading characters. This confusion has a comedy effect because of dramatic irony as the audience knows a lot more about the characters than they do know about each other. In 1.4 Viola speaks aside ?Yet, a barful strife! Whoe?er I woo, my self would be his wife.? Viola, when disguised as a man will know how she would want to be wooed herself, would know how to woo Olivia. As Viola points out, Olivia is likely to become infatuated with Cesario who is wooing her rather than Orsino. This is very funny to the audience as Viola speaks directly to the audience as it sets up the plot, so they know that Olivia is likely to fall for Cesario, which is very comedic. ...read more.

Shakespeare shows love at first sight and it shows that Olivia?s love is strong as she forgets about mourning for her brother and falls for Cesario. In 1.5 Olivia throws back her veil for Cesario which is a symbol of how she is willing to accept his love: ?we will draw the curtain and show you the picture?. In 1.5 Olivia says ?Thy tongue, thy face, thy limbs, actions and spirit, Do give thee five-fold blazon? when talking about Cesario. This shows that she has fallen in love at first sight as she thinks suck fond thoughts of him. The fact that Olivia does fall in love with Cesario at first sight is funny because Cesario is Viola which Olivia is unaware of. Maria and Sir Toby?s love differs from Olivia?s in that it is not at first sight and more of a gradual process. Their love arises from them both sharing the interest in teasing Malvolio, rather than from looks or romantic matters. Shakespeare shows through Sir Toby and Maria that there are other perceptions of love and their love is built on things they have in common. This is counter to Olivia?s rash and capricious love. A feature of comedy in twelfth night is the foolishness of the characters in love. Orsino in the play behaves foolishly when acting on his love for Olivia. Orsino?s love for Olivia is obsessive and foolish. Orsino behaves stubbornly and irritably due to being in love. ...read more.

Also, Malvolio is tortured and made a laughing stock in front of many people in the end. This is not a happy ending for Malvolio. However arguably it may not be perceived as a tragedy as Malvolio could be seen as an antagonist in the play. The end could be a way of punishing Malvolio for behaving so pretentious and rude. His pain and suffering also balanced the happy ending and makes the audience appreciate it more. In a way, I think that Malvolio?s suffering is a sources of comedy because he opposes the beloved characters and is seen as the bad guy so really I think that there is no tragedy in the play perceived by the audience. Also the fact that Olivia and Orsino neither marry the objects of their infatuation has the potential to become tragic but actually turned out for the better also makes the audience appreciate the happy ending more. In conclusion I think that comedy plays a major role in the part of portraying the perceptions of love. Though the play has a very good potential of becoming tragic, this makes the audience appreciate the happy ending. Also I think it makes the play more comical because of the fact it was so close to going wrong for the characters and makes the ending much more of a relief and welcomed so greatly by the audience. BY GEORGINA WADSLEY ...read more.