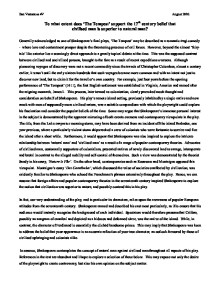 To what extent does 'The Tempest' support the 17th century belief that civilised man is superior to natural man?

To what extent does 'The Tempest' support the 17th century belief that civilised man is superior to natural man? Generally acknowledged as one of Shakespeare's final plays, 'The Tempest' may be described as a romantic tragi-comedy - where love and contentment prosper despite the threatening presence of evil forces. However, beyond the almost 'fairy-tale' like exterior lies a seemingly direct approach to a greatly topical debate at the time. This was the supposed contrast between civilised and uncivilised persons, brought to the fore as a result of recent expeditions overseas. Although pioneering voyages of discovery were not a recent commodity since the travels of Christopher Columbus, almost a century earlier, it wasn't until the early sixteen hundreds that such voyages became more common and with an intent not just to discover new land, but to claim it for the traveller's own country. For example, just four years before the opening performance of 'The Tempest' (1611), the first English settlement was established in Virginia, America and named after the reigning monarch, James I. This process, later termed as colonisation, clearly provoked much thought and consideration on behalf of Shakespeare. His play's remote island setting, previously inhabited by a single native and now amok with men of supposedly more civilised nature, was a suitable compendium with which the playwright could explore his fascination and consider the popular beliefs of the time. Some may argue that Shakespeare's immense personal interest in the subject is demonstrated by the apparent mirroring of both events overseas and contemporary viewpoints in the play. The title, from the Latin tempestus meaning storm, may have been derived from an incident off the island Barbados, one year previous, ...read more.

to stay on the island with his beloved: "Let me live here ever;" This demonstrates Ferdinand being free of the corruption encircling his fellow civilised travellers. The pursuit of kingship and wealth inspired many of those on the island to commit heinous acts, yet love prevails in the heart of Ferdinand. His admiration is gentle and protective. When Miranda offers to help with his tasks, he response is "No, precious creature". The character of Ferdinand is of the utmost wholesomeness and portrayed by the playwright as not simply superior to the natural man, but also to a great many of his fellow Europeans. Although one might presume that the above details ascertain Shakespeare's eagerness to convey 'natural man' as significantly weaker than 'civilised man', there are various aspects of the play, not yet considered, which may prove a rather different outlook. We have already discussed the disparaging image of Caliban, yet not his role as an exploited and maltreated individual. To begin with, Prospero's initial good treatment of the savage was not unreciprocated. Caliban welcomed the stranger onto his island and offered to help as best he could: "and then I lov'd thee, And show'd thee all the qualities o' th' isle," Yet this was not to endure. As already noted, Caliban was to be banished from Prospero's cell for good after his advances on the exiled Duke's daughter. However, the attempted rape of Miranda would only have seemed natural to Caliban in order to ensure the survival of his race. Although such an act cannot be encouraged, it was wrong of Prospero to assume so readily the immorality of Caliban. ...read more.

She does demonstrates a sense of naivety when she proclaims, "How beauteous mankind is!", upon first meeting the civilised strangers. This is further emphasized whilst playing chess, a game symbolic of the conflict between civilised beings, where she is shocked to see that Ferdinand may be cheating. To her, this is not natural. Yet, Miranda is the 'perfect creature', incorrupt, moral and able to display all emotions. However, she cannot be termed as either civilised or as a native of the island. This is imperative as it may imply that, as the complete character, Miranda has lived in the ideal fashion. The conclusion to the 'Tempest' does not encourage the reader to consider the future, but rather reflect on the past events. Although various conclusions may be drawn, I believe that Shakespeare did not intend to prove whether a civilised or natural existence was superior, but rather to stress the importance of the 'natural world' in an ideal way of life. Miranda has been brought up among civilised clothes and books, under the tutorage of her father. However, this occurred in natural surroundings, an island free of all distractions like the kind detailed by Montaigne. She is a perfect character, and this is possibly why. In addition, I feel that Shakespeare believed so strongly in the preservation of the 'natural world' that he attempted to evoke sympathy for the character Caliban. Today, we find the ability to pity characters similar to Caliban far more easily. After such events as the Holocaust, we understand the dangers of persecution. By provoking sympathy for Caliban, who is by no means an ideal creature, Shakespeare may be hoping that the natural world will be left alone, rather than destroyed and corrupted. ...read more.