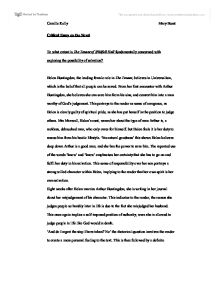 To what extent is The Tenant of Wildfell Hall fundamentally concerned with exploring the possibility of salvation?

Critical Essay on the Novel To what extent is The Tenant of Wildfell Hall fundamentally concerned with exploring the possibility of salvation? Helen Huntingdon, the leading female role in The Tenant, believes in Universalism, which is the belief that all people can be saved. From her first encounter with Arthur Huntingdon, she believes she can save him from his sins, and convert him into a man worthy of God's judgement. This portrays to the reader as sense of arrogance, as Helen is clearly guilty of spiritual pride, as she has put herself in the position to judge others. Mrs Maxwell, Helen's aunt, warns her about the type of man Arthur is, a reckless, debauched man, who only cares for himself, but Helen feels it is her duty to rescue him from his hectic lifestyle. 'his natural goodness' this shows Helen believes deep down Arthur is a good man, and she has the power to save him. The repeated use of the words 'know' and 'knew' emphasises her certainty that she has to go on and fulfil her duty in his salvation. ...read more.

She sarcastically implies she has a 'marble heart' and 'brutal insensibility' to emphasise her share of the blame. This then leads her to reflect upon her marriage, and try to salvage it by saving her husband, which would ultimately make her a better person, and rescue her son from following his father's footsteps. The quote; 'save him from that world and those companions' showing Helen feels it is her duty to save her son from the influences of her debauched husband. Helen pinpoints time in her journal with dates to represent the endurance of living her life. 'Another year is passed; and I am weary of this life', Helen is in despair, which is a sin, and so she turns to her morality to try and improve her situation 'I cannot wish to leave it', stating she cannot leave this sin on her conscience. 'I cannot wish to go and leave my darling in this dark wicked world alone' this self reflexive statement shows she feels it is her duty to save her son, to endure her life for him. ...read more.

Arthur feels he cannot face death without her forgiveness; he needs to repent in order to be welcomed by God in death. This paragraph portrays Arthur's human will in a very negative way, it shows his lack of strong will, as he feels he can not physically move onto the next life 'can't' this also conveys the contrast to Helen's persona, who has the motivation to help people in life, and endure her own life for God's sake as well as her son's. Huntingdon feels he cannot repent, as his pride will not let him 'I can't repent, I can only fear' this shows he cannot admit he is sorry, for he is scared of death. Overall the theme of religion is apparent throughout the entire novel, mainly revolving around Helen. Anne Bronte creates a character contrast with regards to Arthur and his wife, she is the salvation and he represents damnation. The religious background is influenced by Bronte's own religion; universalism, and the idea that everyone can be saved, if they repent and ask for forgiveness of their sins, this belief is portrayed through Helens character and her actions. Camille Kelly Mary Hurst ...read more.