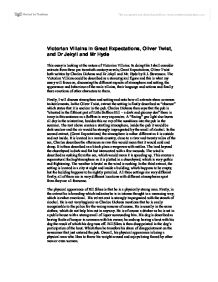 Victorian Villains in Great Expectations, Oliver Twist, and Dr Jekyll and Mr Hyde This essay is looking at the nature of Victorian Villains. In doing this I shall consider extracts from three pre twentieth century novels; Great Expectations, Oliver Twist both written by Charles Dickens and Dr Jekyll and Mr. Hyde by R.L Stevenson. The Victorian Villains could be described as a stereotypical figure and this is what my essay will focus on, discussing the different aspects of atmosphere and setting, the appearance and behaviour of the male villains, their language and actions and finally there reactions of other characters to them. Firstly, I will discuss atmosphere and setting and note how all extracts share common traits/elements. In the Oliver Twist, extract the setting is firstly described as "obscure" which states that it is unclear in the pub. Charles Dickens then says that the pub is "situated in the filthiest part of Little Saffron Hill - a dark and gloomy den" there is irony in this sentence as a Saffron is very expensive. A "flaring" gas-light also burns all day in the wintertime, besides this no ray of the sunshines into the pub in the summer. The text above creates a startling atmosphere, inside the pub it would be dark unclear and the air would be strongly impregnated by the smell of alcohol. ...read more.

He swears, strikes and blasphemes at the dog. When the dog escapes he turns his attentions at the new comer to the pub. The words used to describe him when he hears about his wife are savage, furious, angry and psychotic. Fire in his eyes is mentioned these words give the impression that he is an ill-tempered man and it doesn't take much for him to blow his fuse. Bill also likes to keep his wife in his sight. He most probably has an anger problem. Further on in the extract he attacks his wife and ends up murdering her. He rudely awakes then he thrusts his hand before her, when he starts to strike his wife she clings on to him and starts begging him to spare her life. But he shrugs violently to release his arms, he grabs his pistol and he knew if he were shoot her it would mean immediate detection, so he beats her twice with the handle. She then prays to god to forgive Bill. Bill is shocked when Nancy actually dies. He can't believe what he is looking at so he covers his eyes. This burst of rage shows his lack of control and temper. ...read more.

At the end of the extract Pip thinks the man is a pirate ghost returning to his shackles as if to hook himself up again. He sees the cows lifting their heads to gaze at him, he wondered if they saw it too. Other characters are puzzled when they see Mr. Hyde; the lawyer was puzzled, as Mr. Hyde's footsteps did not match his physique. But he was not scared of Mr. Hyde, which surprised me, as his appearance wasn't like the stereotypical human being. After meeting Mr. Hyde the lawyer is left unsettled. But the nurse sees Mr. Hyde assault a pleasant gentleman, which the nurse seems happy to see. Her reaction to this is she faints. To sum it up all three villains are different, by the way they dress example the man from Great Expectations wears bristly grey wear and Mr. Hyde wears an presentable suit, there physical appearances are different as Mr. Hyde is dwarfish, Mr. Sikes is quite big and the man from Great Expectations is as if he has been in war with all his wounds, and actions as Mr. Hyde attacks a old man, Mr. Sikes beats his wife to death and the man from the second extract threatens a young child to get his own way but in their speech there is a slight link of them speaking similiar, as they all seem to talk a bit roughly. ...read more.