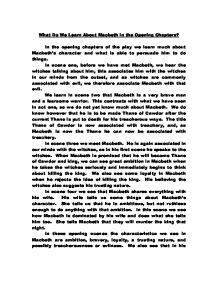 What Do We Learn About Macbeth in the Opening Chapters?

What Do We Learn About Macbeth in the Opening Chapters? In the opening chapters of the play we learn much about Macbeth's character and what is able to persuade him to do things. In scene one, before we have met Macbeth, we hear the witches talking about him, this associates him with the witches in our minds from the outset, and as witches are commonly associated with evil, we therefore associate Macbeth with that evil. ...read more.

The title Thane of Cawdor is now associated with treachery, and, as Macbeth is now the Thane he can now be associated with treachery. In scene three we meet Macbeth. He is again associated in our minds with the witches, as in his first scene he speaks to the witches. When Macbeth is promised that he will become Thane of Cawdor and king, we can see great ambition in Macbeth when he takes the witches seriously and immediately begins to think about killing the king. ...read more.

His wife tells us some things about Macbeth's character. She tells us that he is ambitious, but not ruthless enough to do anything with that ambition. In this scene we see how Macbeth is dominated by his wife and does what she tells him too. She tells Macbeth that they will murder the king that night. In these opening scenes the characteristics we see in Macbeth are ambition, bravery, loyalty, a trusting nature, and possibly treacherousness or evilness. We also see that in his relationship with wife, she is the leader and he does what she tells him to do. ...read more.