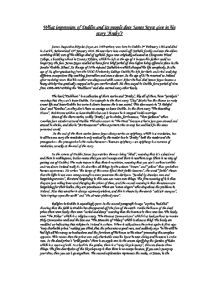 What impression of Dublin and its people does James Joyce give in his story 'Araby'? James Augustine Alrysius Joyce, an Irish writer, was born in Dublin 2nd February 1882 and died in Zurich, Switzerland 13th January 1941. He was born into a well-off Catholic family and was the eldest surviving child; two of his siblings died of typhoid. Joyce was originally educated at Clongowes Wood College, a boarding school in County Kildare, which he left at the age of 6 because his father could no longer pay the fees. James Joyce studied at home for a brief period of time before being offered a place in the Jesuits' Dublin School. At the age of 16 he rejected Catholicism which changed his life completely. At the age of 20, after graduating from the UDC (University College Dublin) he left for Paris and tried studying different occupations like teaching, journalism and even a doctor. At the age of 21 he returned to Ireland after receiving news that his mother was diagnosed with cancer. After she had died James Joyce became a heavy drinker but gradually stopped as he got over her death. He then stayed in Dublin for a period of time from 1904-1907 writing the "Dubliners" and also started many other books. The book "Dubliners" is a collection of short stories and "Araby", like all of them, have "paralysis" meaning that they can't leave Dublin. ...read more.

This means that the priest was only charitable went he knew he was dieing and he wasn't a nice man. In the dead priest's "wild garden" there is an apple tree in the centre signifying the Garden of Eden which is a source of evil. In a bush in the garden, there is a "rusty bicycle-pump", this can denote three things. The first description of the bicycle-pump is that there is no escape because, if you can't pump up your tires, then you can't go anywhere. The second explanation represents the snake, or Satan, in the Garden of Eden because the pump is approximately the same size a snake. The last reason, symbolizes a heart, meaning that, because the heart is not pumping, there is no love or life in Dublin, symbolizing that everything is hopeless. A good part in the story when you know that religion is just a phoney in Dublin is when the boy's Aunt says "I'm afraid you may have to put off your bazaar for this night of Our Lord" actually saying that he should just forget about it in a nasty way. Although she I using religious word she is using them without kindness, meaning that she is not caring about him. The family life in Dublin isn't very pleasant either. ...read more.

Also Jesus resurrected in the east, epitomizing a new beginning or day. When he eventually arrives to Araby, he goes around the stalls and finds that most of them are closed. There is one that is open but when he sees the people at the stall he discovers they all speak in English accents indicating that the bazaar is not exotic at all. A "young lady", who is probably a prostitute, because she is seen flirting with two men at the same time, asks the boy if he wants to buy anything but he says "no, thank you". And from this, all of his dreams end because, the items are too expensive and mundane. At the end of the story there is an epiphany, which is the moment of revelation, to both the reader and the protagonist, because usually the epiphany is only recognisable to the reader. On the second from last paragraph at the end it says "complete darkness" signifying that all hope is gone. The whole of the last paragraph says "gazing up into the darkness I saw myself as a creature driven and derided by vanity; and my eyes burned with anguish and anger", this is the exact moment when he realises that all Dublin was in vain and all he did was in vain. He figures out from this that there actually is no love, no romance and no chivalry. ...read more.