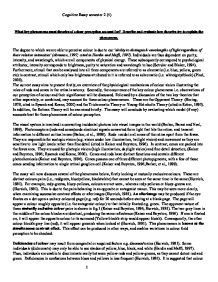 What key phenomena must theories of colour perception account for? Describe and evaluate how theories try to explain the phenomena.

This document was downloaded from Coursework.Info - The UK's Coursework Database Click here to visit Courswork.Info What key phenomena must theories of colour perception account for? Describe and evaluate how theories try to explain the phenomena. The degree to which we are able to perceive colour is due to our 'ability to distinguish wavelengths of light regardless of their relative intensities' (Abramov, 1997; cited in Hardin and Maffi, 1997). Individuals are thus dependent on purity, intensity, and wavelength, which are all components of physical energy. These subsequently correspond to psychological attributes; intensity corresponds to brightness, purity to saturation and wavelength to hue (Setrular and Blaker, 1994). Furthermore, stimuli that can be analysed into all three components are referred to as chromatic (i.e. blue, yellow, green etc) in contrast, stimuli which only has brightness attributed to it is referred to as achromatic (i.e. white/grey/black) (Pinel, 2000). The current essay aims to present firstly, an overview of the physiological mechanisms of colour vision illustrating the roles of rods and cones in the retinal anatomy. Secondly, the occurrence of the key colour phenomena i.e. observations of our perception of colour and their significance will be discussed. ...read more.

found that an error in the visual systems' estimation of illuminant match might contribute to colour consistency. Colour within the visual spectrum, can be matched, by three different wavelengths of light (primary colours), being mixed in different proportions (Hardin and Maffi, 1997). Primary colours are defined on the basis that one colour cannot be matched by a combination of the other two (Pinel, 2000 pg182) [see Theory stage]. Colour matching experiments, for example the 'spilt half' design (fig.3), can be used to show this effect, where individuals alter a combination of three lights to different degrees, to match a presented colour (Ref). This process of colour matching involves the additive mixing of light (i.e. lights are added to make a new light). Red, green and blue are the three primary colours used in additive colour mixing, as they are most capable of producing any other colour (Levine and Shefnes, 2000). For example, by summating red, green and blue light, white light is produced, however the summation of yellow1 and blue light also produces white light, both of which summations are indistinguishable, the name given to this is a metameric match (Levine and Shefnes, 2000). ...read more.

However, this theory is unable to account for colour constancy, when objects are viewed in isolation, as no comparison can be made (Jackobsson, Bergstrom, Gustafsson and Fedorovskaya, 1997). The theory also does not explain the role of colour-opponent cells or similar neurones in colour perception. In addition, the other phenomena cannot be explained by this theory therefore, it is subsequently disregarded as an explanatory model for colour phenomena. In conclusion, a combination of the Opponent and Trichromatic theories would best explain the key phenomenon of colour, as although there is an overlap in that they can both account for colour mixing, other phenomena are exclusively explained by one of other of these theories . E.g. colour deficiency and after-images are neatly accounted for by the Opponent Theory, but not by and the Trichromatic Theory. The author suggests that dichromatic deficiencies might additional be explained in terms of regional problems in the eye, as red/green confusion only occurs in the peripheral regions (Hurvich, 1981). The closest explanation for colour constancy was provided by the Retinex theory, however, neither this or the other two theories, provided a clear explanation for this phenomenon. The author therefore suggests that further investigation is needed, proposing that there may be a three-stage model, where the cone receptors send signals to the opponent cells, which in turn are categorised into different visual systems. ...read more.