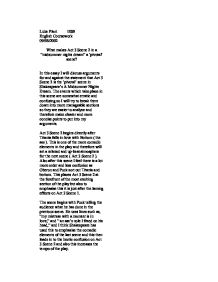 Luke Plant 10S8 English Coursework 09/06/2002 What makes Act 3 Scene 2 in a "midsummer nights dream" a 'pivotal' scene? In this essay I will discuss arguments for and against the statement that Act 3 Scene 2 is the 'pivotal' scene in Shakespeare's A Midsummer Nights Dream. The events which take place in this scene are somewhat erratic and confusing so I will try to break them down into more manageable sections so they are easier to analyse and therefore make clearer and more concise points to put into my arguments. Act 3 Scene 2 begins directly after Titania falls in love with Bottom ( the a*s ). This is one of the more comedic elements in the play and therefore will set a relaxed and up-beat atmosphere for the next scene ( Act 3 Scene 2 ). Also after this scene I feel there is a lot more order and less confusion as Oberon and Puck sort out Titania and bottom. This places Act 3 Scene 2 at the forefront of the most exciting section of the play but also to emphasise this it is just after the laming effects on Act 3 Scene 1. The scene begins with Puck telling the audience what he has done in the previous scene. ...read more.

He is also involved in the lovers arguments when he leads off Lysander and Demetrius and then sends them to sleep so Puck is directly associated with every major event in this scene explained in this paragraph in the one above. He is the character which fuels all the important events in this erratic part of the play. This shows the audience that he is an important character and should be watched carefully as he is everywhere doing everything!! His speeches at the end and beginning give the scene a definite shape. The scene starts and ends with the most influential character in the scene which is puck as explained by the things he does above. The comedic elements are essential to this play as I feel Shakespeare intended it to be a romantic comedy. This comedic elements always feature puck whether it be directly or indirectly. The lovers arguments and the comments about this from the fairies like "what fools these mortals be" gives the play the comedic boost it needs. The lovers arguments show us once again that the fairies are dominant and the humans let their emotions go to far and end up acting childish over love. ...read more.

An example of this would be when puck says, " captain of our fairy band," and, " Hit cupids archery," and this shows that the atmosphere in the wood is mysterious and magic filled. The staging and language which makes the audience believe that this scene is set in the night-time and in a wood is hidden within the text of Shakespeare writing as are many of the stage directions. An example of this would be, "here will I rest till the break of day" and, " bedabbled with the dew" shows that the play is set at night and is outdoors. The effect of songs is that there is even more of a sense of mystery and gives it the magical story feel. Puck's magic fog and leading away the lovers gives the play the feel that in the woods anything is possible and no rules apply in the wood. I will conclude this essay by summing up why I think Act 3 Scene 2 is so pivotal. I think this scene can be given the title of 'most pivotal scene' because it contains so much that is crucial to the entire play. This scene covers the central message of the play, the most comedic elements and all the other aspects of why the wood is magical compared to the city. ...read more.