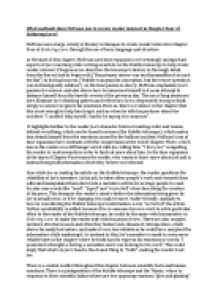 What methods does McEwan use to create reader interest in Chapter Four of Enduring Love?

﻿What methods does McEwan use to create reader interest in Chapter Four of Enduring Love? McEwan uses a large variety of literary techniques to create reader interest in Chapter Four of Enduring Love, through the use of form, language and structure. At the start of this chapter, McEwan uses time expansion over seemingly unimportant aspects of Joe?s morning while writing an article on the Hubble telescope to help create reader interest. It begins as Joe describes the telescope?s history in thorough detail, from the flaws it had to begin with (?the primary mirror was ten thousandths of an inch too flat?) to its final success (?Hubble was grand in conception, but the rescue operation was technologically sublime?). As the time passes so slowly, McEwan emphasizes Joe?s passion for science, and also shows how he immerses himself in it as an attempt to distance himself from the horrific events of the previous day. The use of long sentences here illustrate Joe?s thinking pattern and reflect how Joe is desperately trying to think deeply in science to ignore his emotions. Even so, there is evidence in the chapter that this is not enough to help him forget, such as when he tells his producer about the accident: ?I couldn?t help myself. I had to be saying it to someone?. It highlights further to the reader Joe?s character traits of wanting order and reason behind everything, which can be found in science (the Hubble telescope), which makes him detach himself from the emotions caused by the balloon incident. ...read more.

This shows how Joe believes emotions hinder common reasoning, whether good or bad. This is ironic, considering that later in the chapter, Joe?s reasoning as to Jed following him is very irrational, and is only fuelled by his paranoia. Reader interest is created through the semantic field of contamination throughout the chapter. Words like ?mutated virus?, ?filth?, ?tainted?, ?pollution?, ?unclean? and the lexis word ?Meard Street? (phonetic spelling of the French swear word ?merde?) all evoke a sense of disgust and filthiness in the reader. The idea of spreading disease symbolises how Jed Parry is slowly taking over and destroying Joe?s life. Jed?s contamination of Joe?s mind is shown through Joe?s paranoia and ?fear? throughout the chapter. The origin of his own fear troubles Joe as it seems to be instinctive, as opposed to his reasoned stance on life (as shown in the first few chapters), which is provocative to a scientist dedicated to rational thought. It says, ?Was I so obtuse, not to know fear from the start? Wasn?t it an elemental emotion, along with disgust, surprise, anger and elation, in Ekman?s celebrated cross-cultural study? ...I was afraid of fear, because I did not know yet the cause.? This highlights once again Joe?s analytical nature, always needing an explanation as to why things occur and not just accepting his fear. It also emphasizes how Parry is poisoning his mind with self-doubt, shown by Joe?s use of many interrogatives and questions. ...read more.

The form of a psychological thriller and Joe?s character change is carried on to the end of the chapter where after Joe chases Parry onto the street, and then picks up a jam jar of marigolds in hope ?it might bring me luck, or rather, protection?. This is extremely contradictory of his usually reasonable character, as superstition cannot be backed up by fact, which he normally does. This paradox is Joe?s character shows that almost against his reason, Joe finds that in moments of stress and anxiety, his emotions undermine certainty and his mind runs along irrational lines of superstitious thoughts. Joe even begins to think about religion too, as he says, ?such hopeful acts of propitiation, fending off mad wild unpredictable forces, whole religions were founded.? This reference to religion relates back to Jed, and shows that Jed has been running through his mind the whole day. It also raises the question in the reader that it might be Joe that is obsessed with Jed instead, if he is constantly thinking about him. The way this chapter ends without a resolution or confirmation of Joe?s paranoia means that the reader is left on a cliff-hanger, which compels them to read on in hope of finding out who was following Joe, or even if anyone even was. In conclusion, McEwan uses numerous techniques in order to create reader interest, through language, form and structure. These techniques ensure that the reader is kept keen and eager to find out more about Joe?s suspicion of Jed. ...read more.