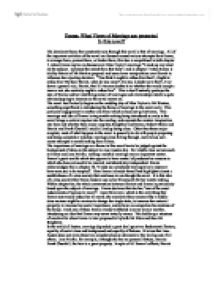 What Views of Marriage are presented In this novel?

Emma: What Views of Marriage are presented In this novel? The dominant theme that constantly runs through this novel is that of marriage. All of the important activities of the novel are focused around various attempts from Emma, to arrange them, prevent them, or hinder them; this idea is empathised in both chapter 1, where Emma replies in discussion to Miss Taylor's marriage "I made up my mind on the subject. I planned the match from that hour", and in chapter 7 when Emma is told by Harriet of Mr Martins proposal and uses clever manipulation over Harriet to influence her rejecting decision: "You think I ought to refuse him then?...Ought to refuse him! My dear Harriet, what do you mean? Are you in doubt as to that?...I lay down a general rule, Harriet, that if a woman doubts as to whether she would accept a man or not, she certainly ought to refuse him". This in itself instantly portrays the idea of Emma and her interfering nature of marriages and relationships which is quite obviously going to increase as the novel moves on. ...read more.

and should stay independent: Emma acknowledges this in chapter 10, "I must see somebody very superior to anyone I have seen yet, to be tempted". Here Emma is beside herself and highlights almost a snobbishness of a class society that continues to run though the novel. It is this idea of a class society that Emma tends to use as her framework for her match making. Within chapter ten, the whole conversation between Harriet and Emma is particularly based upon the subject of marriage. Emma declares that she has "non of the usual inducements of women to marry". Apart from love, which is the only thing that Emma says would induce her to marry, she mentions three reasons why a middle-class women might be anxious to change her single state; to increase her material property, to increase her social importance, and to have an occupation has mistress of the house. Each one of these Emma already withholds in some way or another, introducing an idea that Emma may never actually marry. ...read more.

As already said, the initial promotion of match making is highlighted in chapter 1 in relation to the marriage of Miss Taylor and Mr Weston. Of this marriage we are told that "Emma had always wished and promoted the match". This chapter is dominated with thoughts such as this, ending with Emma showing determination to continue her activities in the match making field. Throughout the novel, Mr Knightley is the character that shrewdly observes that Emma and her match making is more likely to do more harm than good. With this in mind, there is an irony in what immediately follows, as Emma declares her resolution to find a match for Mr Elton the vicar. In this particular activity she will do even more harm to herself than even Mr Knightley could foresee. Her attempts to match Harriet and Mr Elton ends abruptly in chapter 15 after Mr Elton's proposal of marriage to Emma, and results in a huge embarrassment from Emma. Overall therefore, throughout this novel, each chapter is vigorously based upon marriage in one way or another, and in the whole is attempting to represent the views and opinions of people in Jane Austen's time, in particular in the light of gender, class and material differences. ...read more.