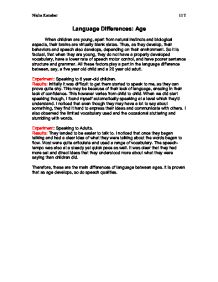 When children are young, apart from natural instincts and biological aspects, their brains are virtually blank slates

Language Differences: Age When children are young, apart from natural instincts and biological aspects, their brains are virtually blank slates. Thus, as they develop, their behaviors and speech also develops, depending on their environment. So it is factual, that when they are young, they do not have a properly developed vocabulary, have a lower rate of speech motor control, and have poorer sentence structure and grammar. ...read more.

This may be because of their lack of language, ensuing in their lack of confidence. This however varies from child to child. When we did start speaking though, I found myself automatically speaking at a level which they'd understand. I noticed that even though they may have a lot to say about something, they find it hard to express their ideas and communicate with others. ...read more.

Most were quite articulate and used a range of vocabulary. The speech-tempo was also at a steady yet quick pace as well. It was clear that they had more set and direct ideas that they understood more about what they were saying than children did. Therefore, these are the main differences of language between ages. It is proven that as age develops, so do speech qualities. ?? ?? ?? ?? ...read more.