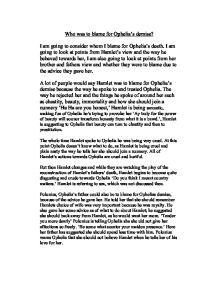 Who was to blame for Ophelia&amp;#146;s demise?

Who was to blame for Ophelia's demise? I am going to consider whom I blame for Ophelia's death. I am going to look at points from Hamlet's view and the way he behaved towards her, I am also going to look at points from her brother and fathers view and whether they were to blame due to the advice they gave her. A lot of people would say Hamlet was to blame for Ophelia's demise because the way he spoke to and treated Ophelia. The way he rejected her and the things he spoke of around her such as chastity, beauty, immortality and how she should join a nunnery 'Ha Ha are you honest,' Hamlet is being sarcastic, making fun of Ophelia he's trying to provoke her 'Ay truly for the power of beauty will sooner transform honesty from what it is a bawd.', Hamlet is suggesting to Ophelia that beauty can turn to chastity and then to prostitution. The whole time Hamlet spoke to Ophelia he was being very cruel. ...read more.

Ophelia thought Hamlet loved her deeply but after Hamlet being so horrid to her and her father's advice it drove mad of not knowing what to do. Laertes, Ophelia's brother also advised her of what she should do with Hamlet. His advice could have been what finally tipped Ophelia into complete madness due to the fact that the advice he gave her was similar to the advice her father gave her. Ophelia's brother advised her to spend less time with Hamlet as it seemed she was obsessed by him, he also advised her that she shouldn't sleep with Hamlet because he would lose respect for her and he also warned her like her father that Hamlets choice of wife would be very important. 'Farewell Ophelia and remember well what I have said to you' Laertes is saying good-bye to Ophelia and warning her to remember what he has said. 'Tender yourself more dearly.' He is saying to Ophelia not to give her affections away so freely. I also believe the pressure of royalty played a part in Ophelia's demise , because Hamlet was royalty it meant that the choice of wife for marriage was extremely important. ...read more.

I don't believe Ophelia's brother and father played a huge part in her death because they both gave her some very good and worthwhile advice as of what to do with Hamlet. I think that with Hamlets weird and immature in thoughtful behaviour and the way Ophelia probably knew deep down that their was little chance of there relationship developing into marriage was part of the reason Ophelia went mad and committed suicide. I think Hamlet felt frightened of his feeling toward Ophelia because she wasn't of the same class as him and he knew even if he did admit his feelings about her, there was little chance of him being allowed to marry her. Although I do believe other factors did play a part in Ophelia's demise. Ophelia's Father and Brother both cared for her a lot and tried to encourage her to think about what she was going to do. I believe Ophelia was completely confused to the state of not knowing what to do and the only option was to kill herself, which was what she did. ...read more.

This essay begins to try to make lots of relevant points; however they are not justified or fully developed which suggests a somewhat superficial understanding of the text.
It is preferable to develop a few points well and really consider language, form and structure rather than make a lot of quite basic points.