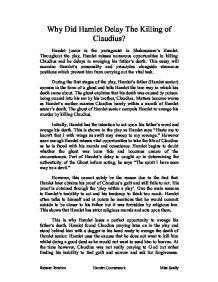 Why Did Hamlet Delay The Killing of Claudius?

Why Did Hamlet Delay The Killing of Claudius? Hamlet junior is the protagonist in Shakespeare's Hamlet. Throughout the play, Hamlet misses numerous opportunities in killing Claudius and he delays in avenging his father's death. This essay will examine Hamlet's personality and principles alongside strenuous positions which prevent him from carrying out the vital task. During the first stages of the play, Hamlet's father (Hamlet senior) appears in the form of a ghost and tells Hamlet the true way in which his death came about. The ghost explains that his death was caused by poison being poured into his ear by his brother, Claudius. Matters become worse as Hamlet's mother marries Claudius barely within a month of Hamlet senior's death. The ghost of Hamlet senior compels Hamlet to avenge his murder by killing Claudius. Initially, Hamlet has the intention to act upon his father's word and avenge his death. This is shown in the play as Hamlet says "Haste me to know't that I with wings as swift may sweep to my revenge." However soon enough Hamlet misses vital opportunities to take the life of Claudius as he is faced with his morals and conscience. ...read more.

Hamlet uses the excuse that he does not want to kill him whilst doing a good deed as he would not want to send him to heaven. At the time however, Claudius was not really praying to God but rather finding his inability to feel guilt and sorrow and ask for forgiveness. Hamlet decides that it would be best to kill him while he is doing something against religion, while he drunk or asleep with his brother's wife, who is now his wife. Although Hamlet has a valid reason, this merely seems like another delay tactic as he fails to make any sincere future plans to kill Claudius. The most reasonable explanation to the delay is Hamlet's own morals and ethics. His inability to act, and his tendency to think too much. At times Hamlet comes across as somewhat mad. The whole situation becomes like a huge burden, too for him to bear. The Ghost's miraculous revelation alongside his mother's sinful marriage all in the midst of mourning for his father's death adds to his melancholic disposition. ...read more.

Revenge was prohibited by ecclesiastical law, but the duty of 'personal honour' was accepted during Elizabethan times. Hamlet's inability to act was somewhere in the midst of these two contradicting laws. At this stage it is clear that Hamlet is having serious doubts about killing the King. After all, to kill an anointed King, even in an act of revenge, was considered a serious offence. Furthermore, Hamlet in left between a moral dilemma while he confronts his mother. His father appears and orders Hamlet to stop confronting his mother when the ghost says 'Leave her to heaven'. If we interpret heaven as being God then this would mean that God will deal with the sins of Hamlet's mother. But surely, if it was up to God to deal with Hamlet's mother then was it not up to God to deal with Claudius? In conclusion, Hamlet delays in killing the King because of his own personal moral dilemmas alongside his psychological ethics; he is a philosopher and is of a melancholic disposition. External events in the play do not contribute to Hamlet's delay, but are rather used to Hamlet's advantage as excuses to further delay avenging his father's murder. Ridwan Ibrahim Hamlet Coursework Miss Scally ...read more.