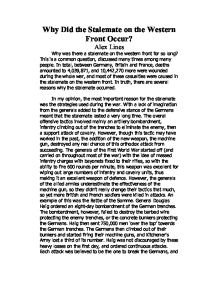 Why Did the Stalemate on the Western Front Occur?

Why Did the Stalemate on the Western Front Occur? Alex Lines Why was there a stalemate on the western front for so long? This is a common question, discussed many times among many people. In total, between Germany, Britain and France, deaths amounted to 4,039,871, and 10,442,270 more were wounded during the whole war, and most of these casualties were caused in the stalemate on the western front. In truth, there are several reasons why the stalemate occurred. In my opinion, the most important reason for the stalemate was the strategies used during the war. With a lack of imagination from the generals added to the defensive stance of the Germans meant that the stalemate lasted a very long time. The overall offensive tactics involved mainly an artillery bombardment, infantry climbing out of the trenches to eliminate the enemy, then a support attack of cavalry. However, though this tactic may have worked in the past, the addition of the new weapon, the machine gun, destroyed any real chance of this orthodox attack from succeeding. The generals of the First World War started off (and carried on throughout most of the war) with the idea of massed infantry charges with bayonets fixed to their rifles, so with the ability to fire 600 rounds per minute, this weapon was excellent for wiping out large numbers of infantry and cavalry units, thus making it an excellent weapon of defence. ...read more.

Artillery fire accounted for a huge majority of casualties in the First World War (58%), so it was obviously very effective. However, the Allied generals felt that artillery should be used for offensives. It may have started off effective, but the Germans soon built deep bunkers, which protected them from most physical damage from the shells. Another effective defensive weapon was barbed wire, which both sides used. This caused attacking men to be trapped, and easy targets for enemy fire. Thus it prevented a lot of men from attacking the trenches. Artillery fire was used in an attempt to destroy the wire, but more often than not it threw the wire up, and it came down often in a worse tangle than before. Not only did this fail to work, but it also warned the defenders of an attack. These weapons meant that it was very hard to get a successful attack through to the trenches, and these breakthroughs were usually crushed before reinforcements came in time. There were some weapons created in an attempt to cause a massive breakthrough, but they weren't really effective. Gas was used for the first time in the First World War, but this was countered with the invention of gas masks. Underground mining was used to blow up trenches, but though effective, it took too long to lay mines, and the explosions only destroyed a small part of a trench. So, the weapons developed did very little to break the stalemate. ...read more.

This means that bombardment would have had to have been left out, so that there was a greater chance of attacking with surprise on their side. If conscription hadn't been introduced to armies, then the war of attrition wouldn't have been able to continue at Verdun or indeed anywhere else, because the armies would simply have run out of soldiers. This would mean that which ever side ran out of men first would have to surrender. The side that ran out first would probably be Germany's side, since that it was only Germany and Austria-Hungary fighting together, whereas the Allies had Russia, France, Great Britain, and all of Great Britain's colonies fighting together. If it weren't for the compressed front in which the stalemate took place, then there would have been the possibility of flank attacks. The compressed front, however, limited the generals' strategy. The geography of no-man's land also affected tactics. The attackers usually had real problems crossing no-man's land, and this was where geography affected the weapons used. Machine guns, given high ground, could hold off a lot of men for a very long time. It could be said that weapons affected geography as well, because the artillery and mines created craters that could be used either as obstacles or cover. Communication also affected tactics. The breakthroughs that were made weren't capitalised because of bad communication, so reinforcements usually arrived too late. So, all in all, I believe that the main reason for the stalemate is the lack of imagination on the generals' part, but really the other reasons are almost as important. ...read more.