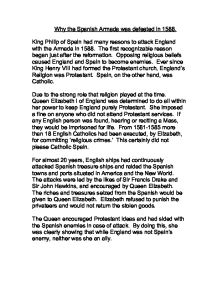 Why the Spanish Armada was defeated in 1588.

Why the Spanish Armada was defeated in 1588. King Philip of Spain had many reasons to attack England with the Armada in 1588. The first recognizable reason began just after the reformation. Opposing religious beliefs caused England and Spain to become enemies. Ever since King Henry VIII had formed the Protestant church, England's Religion was Protestant. Spain, on the other hand, was Catholic. Due to the strong role that religion played at the time. Queen Elizabeth I of England was determined to do all within her power to keep England purely Protestant. She imposed a fine on anyone who did not attend Protestant services. If any English person was found, hearing or reciting a Mass, they would be imprisoned for life. From 1581-1585 more than 18 English Catholics had been executed, by Elizabeth, for committing 'religious crimes.' This certainly did not please Catholic Spain. For almost 20 years, English ships had continuously attacked Spanish treasure ships and raided the Spanish towns and ports situated in America and the New World. The attacks were led by the likes of Sir Francis Drake and Sir John Hawkins, and encouraged by Queen Elizabeth. The riches and treasures seized from the Spanish would be given to Queen Elizabeth. Elizabeth refused to punish the privateers and would not return the stolen goods. ...read more.

you we are very weak...how do you think we can attack so great a country as England with such a force as ours is now?"3 Duke of Medina, the Armada's leader. On August 2nd, a battle took place off Portland Bill. In all the battles the same problem occurred. The two countries had different strategies for battle at sea. The Spaniards used the lash and board method. This was when the two ships fired from 50m to kill of some men then, came along side each other and lashed the ships together with ropes. The soldiers from both ships would fight a battle on both ships as if fighting on land. This meant that large ships and many men were carried on Spanish ships. On the other hand, the English had planned to sail past a Spanish ship and shoot a broadside, then turn around and continue this until the Spanish ship blew up, or surrendered. The Spanish could not use the English way of battle because their ships relied on the wind for speed and direction. The English ships could turn against the wind and because most of the English ships were smaller, they could turn around quicker and in tighter gaps. The English cannons had a longer firing range and could reload their cannons faster. ...read more.

W.Phizachaely, blamed the defeat of the Armada on the fire ships at Calais as stated on his website. He also states that the English had many tricks up their sleeves that helped them to win. I agree with this because if the Spanish had not have been fooled into believing that the English had ammunition left, the Spanish may have gone through the channel and defeated the English. The fire ships may have contributed to the cause of the defeat but I believe that the weather defeated the Armada. Many wonder why the Armada still holds the name "The Invincible Armada" or "The Great Armada". It was impossible to defeat when in formation and so was invincible. The Armada may not have been successful but it was great and at that time only a country like Spain would put so much effort in for so very little outcome. 1. Philip II. 1587 2. One Captain writing in his diary. 3 Duke of Medina Sidonia talking to Philip II. 24th June 1588. 4 Antonio De Vanegas, aboard the ship San Martin 5 A History of England by J.Oliphant 1920 6 A sailor aboard the San Lorenzo reporting later about Cadiz Harbour.7th August 1588. 7 Duke of medina Sidonia giving instructions to the Spanish Captains in Lisbon.8th May 1588. 8 Philip II to the survivors of the Armada. ...read more.