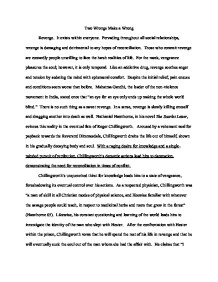 With a raging desire for knowledgeand a single-minded pursuit of retribution, Chillingworth's demonic actionslead him to damnation, demonstrating the need for reconciliation in times ofconflict.

Two Wrongs Make a Wrong Revenge. It exists within everyone. Pervading throughout all social relationships, revenge is damaging and detrimental to any hopes of reconciliation. Those who commit revenge are cowardly people unwilling to face the harsh realities of life. For the meek, vengeance pleasures the soul; however, it is only temporal. Like an addictive drug, revenge soothes anger and tension by sedating the mind with ephemeral comfort. Despite the initial relief, pain ensues and conditions seem worse than before. Mahatma Gandhi, the leader of the non-violence movement in India, stated once that "an eye for an eye only ends up making the whole world blind." There is no such thing as a sweet revenge. In a sense, revenge is slowly killing oneself and dragging another into death as well. Nathaniel Hawthorne, in his novel The Scarlet Letter, evinces this reality in the eventual fate of Roger Chillingworth. Aroused by a vehement zeal for payback towards the Reverend Dimmesdale, Chillingworth drains the life out of himself, shown in his gradually decaying body and soul. With a raging desire for knowledge and a single-minded pursuit of retribution, Chillingworth's demonic actions lead him to damnation, demonstrating the need for reconciliation in times of conflict. Chillingworth's unquenched thirst for knowledge leads him to a state of vengeance, foreshadowing its eventual control over his actions. ...read more.

With his heart passionate about sucking the life out of Dimmesdale, his eyes of "lurid fire" testify to his satanic temperament (157). He has become "a deformed old figure, with a face that haunted men's memories longer than they liked" (160.) The simultaneous growth of zealous revenge with that of his physical deformity is highly symbolic, and Hawthorne implies that payback of any sort is certainly damaging. Hawthorne clearly explains the devilish metamorphosis from within and declares: Old Roger Chillingworth was a striking evidence of a man's faculty of transforming himself into a devil, if he will only, for a reasonable space of time, undertake a devil's office. This unhappy person had effected such a transformation, by developing himself, for seven years, to the constant analysis of a heart full of torture, and deriving his enjoyment thence, and adding fuel to those fiery tortures which he analyzed and gloated over. (155-156) His heart has become Satan's h**l, a place where ardent fervor burns for Dimmesdale's downfall. Although the revenge eventually destroys Chillingworth, it satisfies his needs temporarily. Upon the scaffold with Hester and Pearl, Dimmesdale is terrified as he sees Chillingworth in the distance. Filled with dread, he exclaims, "'I shiver at him! Dost thou know the man? ...read more.

Dimmesdale, however, refuses to be victimized by Chillingworth any longer. He is determined to make a public confession of his sin before he dies. After Dimmesdale confesses openly about his sin, Chillingworth has nothing left for sustenance and he can no longer remain a leech. Chillingworth's impulse to restrain Dimmesdale from his confession implies that he knew that he could no longer live if the secret was revealed. Part of the motivation for his existence was to enjoy a certain dominance over Dimmesdale's guilt. Dimmesdale, finally freed from Chillingworth's powerful grip over him, dies peacefully, and Chillingworth dies soon after. To plot revenge in any situation is harmful. Chillingworth's plot of revenge brings the downfall of Dimmesdale, as well as his own. For the last seven years of his life, his days were passed with a steadfast goal of creating torment for the man who sinned and hurt him the most. In this case, Hawthorne is the Aesop, and he strives to communicate the moral and truth about revenge. Like Mahatma Gandhi, Hawthorne indicates that revenge is a continual process-one act of revenge leads to more atrocious acts by the opposition, and in the end no one wins. The human mind has been deceived. Revenge is the trap we all fall into every once in a while. Humans just need to remember to be open towards each other with forgiving and receiving arms and to embrace the enemy with love, not hate. ...read more.