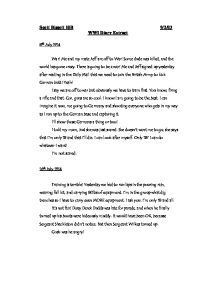 Scott Bissett 10B 9/2/03 WWI Diary Extract 8th July 1914 War! Me and my mate Jeff are off to War! Some dude was killed, and the world has gone crazy. There is going to be a war! Me and Jeff signed up yesterday after reading in the Daily Mail that we need to join the British Army to kick German butt! Yeah! I say we are off to war but obviously we have to train first. You know, firing a rifle and that. Cor, guns are so cool. I know I am going to be the best. I can imagine it now, me going to Germany and shooting everyone who gets in my way as I run up to the German base and capturing it. I'll show those Germans a thing or two! I told my mum, but she was just scared. She doesn't want me to go; she says that I'm only 18 and that I'll die. I can look after myself. Only 18? I can do whatever I want! ...read more.

Some of the lads in my platoon could hit a shilling at 100yds. Absolutely amazing. Me? I can hardly hit a cut out of a man at 50yds. I'm even putting in extra training with Sarge. He's a hard bastard that one. France has declared war. Britain is likely to declare soon. Our battalion will be deployed to France soon after. I saw the white bird again today. It gave me courage, but I am still nervous. They say the Germans are cannibals. 4th August 1914 I saw Jeff today and he told me that Britain has declared war!!! I am very excited. However I am also rather apprehensive. And I'm terrified. We get deployed to the front line in three days. 7th August 1914 Deployed today. Very little time to speak. Haven't seen Jeff for a while. 23rd August 1914 Jeff is dead. Hit directly by a shell. He died on the 10th. I could be next. 19th October 1914 The war is dragging on. I'm absolutely terrified. ...read more.

Sometimes while I am sniping I can watch the birds flying. It is so strange. While all this fighting goes on, sometimes birds still fly across. Unfortunately for them, most of them get hit. This is fortunate for us, as it is quite good meat on a bird. We are told it is chicken but I can see the birds being fetched for the cooks. 10th November 1918 I realised today that I am the only surviving member of my old regiment. I am a sergeant. This title was officially given to me a few months ago, but I was only told today. While I was sniping today, I saw a white bird fly over from the German side of the trenches onto our side. Then a few minutes later, another bird flew from our side onto the German side. Could this be an omen of peace? 12th November 1918 Peace was called yesterday morning at 11 o'clock but we weren't told until 8 at night. I have been made into an officer, after another lieutenant died last night. I am going to sell my commission and move back in England. It has been ages since I heard from my mum. Finally the war is over! ...read more.