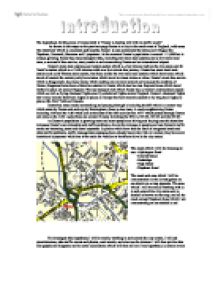 The hypothesis for this piece of coursework is "Exeter is dealing well with its traffic needs" As shown in the maps on the previous page Exeter is a city in the south-west of England, with areas like Dartmoor which is a national park nearby, Exeter is also surrounded by towns and villages like Topsham, Exmouth, Starcross and Lympstone. At the moment Exeter's population is around 111,000 but is always growing. Exeter has many transport links, including two main train stations and a few more local ones, a successful bus service, many roads in and surrounding Exeter and an international airport. Exeter's main train stations are Central station which is a few minute walk to the city centre and St David's station which is a 15-20 minutes walk or a few minute bus journey. ...read more.

The last transport link which Exeter has is Exeter's international airport which as well as flying chartered flights also fly scheduled flights around England. Exeter's chartered flights don't only include short haul flights to places in Europe but have recently started to fly long haul flights to places like New York and Canada. Exeter has many roads surrounding and passing through it including the M5 which is a motor way which starts by Exeter and ends up by Birmingham, there is also many A roads neighbouring Exeter including A30 and the A38 which join at the start of the M5 and also the A377 which passes through Exeter and joins to the A30. ...read more.

The roads which I will be focusing on are: �Alphington Road �Cowick Street �Exebridge �High Street �Topsham Road The roads and area which I will be concentration in this investigation on are shown on a map opposite. The area which I will be mainly working with is in and around the city centre and is shaded in brown on the map, and all the roads except Topsham Road which I am concentrating on are shaded in red To investigate this hypothesis I will be mainly working in and around the city centre, I will ask questionnaires, take traffic counts and photos, send emails, and also use the internet. I will then put the data into graphs and diagrams and do some calculations which will then tell me if my hypothesis is correct or not. ...read more.

A good introduction to the study area which clearly discusses the transport provision in the Exeter area. To improve, the introduction could have been extended to discuss specifically the types of data that will be collected and how this data will be presented.
4 stars