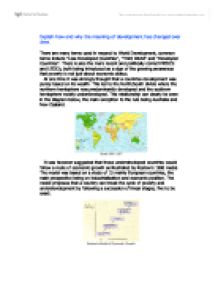 Explain how and why the meaning of development has changed over time.

Explain how and why the meaning of development has changed over time. There are many terms used in respect to World Development, common terms include "Less Developed Countries", "Third World" and "Developed Countries". There is also the more recent and politically correct MEDC's and LEDC's, both being introduced as a sign of the growing awareness that poverty is not just about economic status. At one time it was strongly thought that a countries development was purely based on its wealth. This led to the North/South divide where the northern hemisphere was predominantly developed and the southern hemisphere mostly underdeveloped. This relationship can clearly be seen in the diagram below, the main exception to the rule being Australia and New Zealand. World GNP 1997 It was however suggested that these underdeveloped countries would follow a route of economic growth as illustrated by Rostow's 1960 model. The model was based on a study of 15 mainly European countries, the main prospective being on industrialisation and economic position. The model proposes that a country can break the cycle of poverty and underdevelopment by following a succession of linear stages, five to be exact. ...read more.

* Stage 5 - High Mass Consumption Personal incomes grow and so the demand for tertiary industry intensifies. There will therefore be an increase in tertiary employment as manufacturing now begins to decline. Basic amenities are now common place and the country should have a stable infrastructure, political situation and a high GNP. Rostow's model would require substantial investment in capital, unless there is external intervention it would be very difficult for a country to leave stage 1. Barke and O'Hare who themselves made a development model were the first to publicly reject the 'Rostow' model, in 1984 they argued that the model was too 'Eurocentric' expecting all countries to follow the west (America and Britain etc.). They agreed that yes a country can and some already had passed through the 5 stages, but it is unlikely for a country to take off without structural and social change. Other criticisms of Rostow's model include the model assuming all countries start off from the same level, and that it does not take into consideration the debt a country can gather from aid to help it transcend from stage 1 to 2. ...read more.

This meant that although a countries natural resources would still be needed for it to develop, it should be done so in a sustainable way as to not compromising the ability for future generations to meet their own needs. This 'greening' of development initiated numerous schemes such as in the Amazon Rain Forest, where for every tree that was to be cut-down another would be replanted. It is this sustainable approach to development that is still being implemented today, with concerns about global warming and a lack of crude oil to name but a few. Although Rostow explained the development of western countries well he failed to consider the different cultures and traditions each country has. As quoted by Mark Tully in 1993, "Development is more than mere economics", he was right, it is about much more than that. Social, economic and political factors need to be taken into account for a true projection of how much a country really is developed, and so the new meaning of development is defined as, 'the progressive improvements in the standards of living and quality of life for an increasing proportion of the population'. Lee Evans 13MS ...read more.